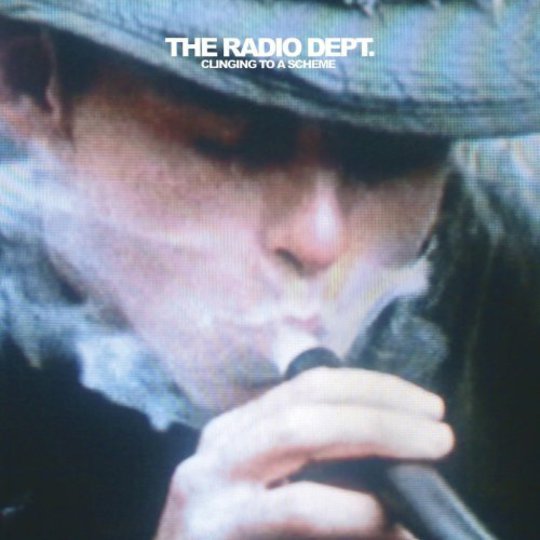 It’s been a weird four years for The Radio Dept since releasing their brilliant second album Pet Grief in 2006. That record was awash with lush, woozy textures – proto-chillwave if you will - but unlike the class of 2009, Radio Dept had the songs to back up their hazy soundscapes too. Since then the band has dropped off the radar, with only phantom album release-dates and a couple of disappointing singles to their name. But just when their moment seems to have passed the Dept re-opens with Clinging To A Scheme.

Four years is smoothed into nothing with opener ‘Domestic Scene’, which picks up where they left off, all low-key shoegazey textures and Strokes-y vocals. There’s no fanfare, no triumphant comeback sound – the big statements are left to samples, like the one that opens ‘Heaven’s On Fire’ – "I think we should destroy the bogus capitalist process that is destroying youth culture". It voices the most interesting aspect of underground music in 2010, especially scenes like chillwave: the reigniting of DIY culture, with the bedroom the studio again, the cassette in vogue – a complete rejection of mainstream industry.

Album highlight ‘Never Follow Suit’ is primed to soundtrack barbecues, beaches and sunny days all summer. The cheap offbeat keyboard stabs make a play for cod reggae but somehow sound effortlessly cool – ditto the cheap flute sound. The middle of the song breaks down for another sample, this time something that sounds right off an early Nineties rap record. In other hands this disparate collection of things that sound like horrible ideas written down would be a disaster but The Radio Dept’s ear for vocal melody and arrangement make it not only work, but sound like one of the year’s best singles.

It’s the odd choices that The Radio Dept make sound-wise that mark them out as more interesting than the crowded pack of synthpop or shoegaze bands of the moment. The guitars sound like they are plugged straight into a recording device – the effect is lo-fi, a bit like listening to a practise amp, but the sound is distinctly theirs – it’s the same sound as on Lesser Matters in 2003, and it’s nice to hear a band evolve gently, sticking to their guns.

It’s a surprise that the band managed to get through those weird four years and make such a consistent album – from front to back it’s exceptionally well sequenced. It’s every bit as good as Pet Grief and confirms The Radio Dept's skill at song craft and aesthetics, easily marking them out from buzz artists like Toro Y Moi, Washed Out or Memory Tapes – guys who sound great, but haven’t quite got the chops yet to write a genuinely great album. Radio Dept have written three now, and you would hope they don’t have to wait another four years for people to pick up on them.