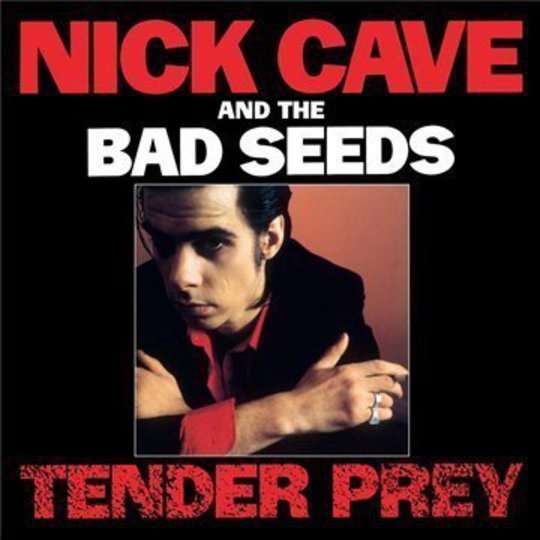 It doesn't take more than the first few bars of shock and awe opener 'The Mercy Seat' to realise that Tender Prey is an extremely important album, as much for Nick Cave as a musician as for the musical landscape in general.

The Bad Seeds had already hinted at what was to come with Kicking Against The Pricks, the covers album that no one had seen coming. Full as it was of, what many people considered to be, cheesy pop standards. If that album was Cave presenting himself as the iconic troubadour and breaking free of the post punk/goth scene, then Tender Prey was a further step toward a full transformation. On his own terms.

The record streamlines all of the band's previous guitar abuse and ragged brutality into concise, atmospheric and theatrical pop songs. Barring the jackhammer assault of the aforementioned 'The Mercy Seat', Tender Prey takes a thousand mile step away from Cave's Birthday Party roots and sees him assume a position in line with performers such as Roy Orbison and Leonard Cohen. His croon more assured, his stories painted in more vivid lyrical colours and his outlook more than a little Biblical. With his recent output (Grinderman aside) drifting ever further away from the aural terror of his early work with each release, the new set of remasters (Tender Prey, The Good Son and Henry's Dream) are a very useful reminder of this transitional period in Cave's career.

The quality of the remastering is noticable; the seething bassline of 'Up Jumped The Devil' has been brought front and centre where it truly belongs, the delightfully dischordant guitar work of Bilxa Bargeld clangs it's way all over twisted murder ballad lovesong 'Deanna' as God originally intended – but the songwriting is so strong that this record would sound good being played on the back of a bus through shitty mobile phone speakers.

Rest easy though, there's definitely more balls where balls are needed and space where things need to breathe. With each member being involved in a variety of other ventures, musical and otherwise, (Cave being knee deep in a drug habit, his first novel And The Ass Saw The Angel, not to mention being wrapped up in the filming of both 'Wings Of Desire' and 'Ghosts Of The Civil Dead', drummer Thomas Wylder spending time with Die Haut, Blixa back in the newly reformed Einsturzende Neubauten and Mick Harvey juggling Crime And The City Solution and soundtrack work) it's a wonder that the record got made at all – Cave was only in possession of a handful of lyrics when recording commenced – let alone that it ended up sounding so, well, perfect.

As with the previous remasters, Tender Prey, in addition to being remixed in '5.1 surround sound' on which I can't comment due to the nature of my embarrassingly prehistoric stereo system, comes in a two disc CD/DVD deluxe edition, which features the b-sides from the singles, extended (and actually pretty interesting) sleevenotes and the fifth part of 'Do You Love Me Like I Love You', the short film in which you get to play spot the famous fan with a variety of talking heads discussing their love for, or in the case of band members, involvement in the record.

It's pretty engrossing for the most part, apart from Bobby Gillespie popping up and fidgeting all over the screen. The b-sides also make the deluxe packaging worth investigating. The acoustic version of 'The Mercy Seat' being a particular revelation, showing a tender, haunting heart at the centre of the song. In an age where reissues are a quick and easy way to make a buck from nostalgic record buyers, Tender Prey is a welcome chance to reappraise a phenomenal artist in a thoughfully presented package.