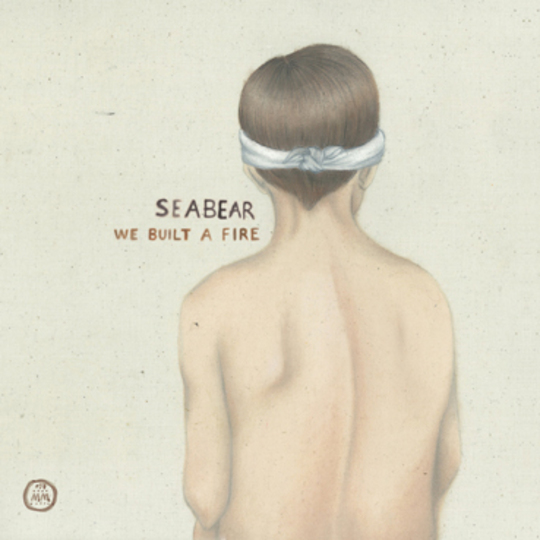 Icecaps cover more than three-quarters of Greenland; meanwhile in Iceland ‘summers are surprisingly warm and winters are not as cold as you might expect,’ according to the Icelandic Tourist Board. Surely the simple explanation is that there was a monumental mix up by the people who name islands. (The notion they exchanged names to fool invaders is an urban myth.) Still, it isn’t unexpected to discover that climate and the country’s predominately rural living conditions and the intensity of the landscape play an important thematic role for its inhabitants, specifically for its artistic community. Iceland’s better known acts such as Björk, Sigur Rós and Múm convey a palpable sense of isolation, desperation for warmth amidst cold winter nights, and an ever-present instinct for survival. It makes for an intriguing combination of practicality and philosophy, and with We Built A Fire, Seabear makes a valiant case to join the aforementioned artists as one of the island’s preeminent musical postcards to the world.

Sindri Már Sigfússon began Seabear as a solo project in 2000, though it has since morphed into a seven-member band. Seabear’s Singing Arc EP in 2005 and debut album The Ghost That Got Carried Away in 2007 proffered songs with titles like ‘We Like Winter Clothes’, ‘Seashell’, ‘Summer Bird Diamond’ and ‘Sailors Blue’. The lyrics were introspective and melancholy but with just enough bounce in the melody to keep the whole thing from collapsing under the weight of its own sensitivity. Standout selections like the sweet acoustic-driven ‘I Sing I Swim’ were able to evoke a sense of rain-soaked playfulness, in a manner similar to Belle and Sebastian singing about romance in Scotland. Even so, the cumulative effect remained largely ineffectual; the songs’ climatic moments tended to drift away once the music stopped.

On We Built A Fire Seabear address past shortcomings. The direction of simple instrumental lines is altered by a handful of superbly crafted zigzags. Song construction isn’t quite as nifty and complex as, say, Grizzly Bear, but there are plenty of moments to keep you coming back for more. If it’s not a wholly corrective fix, it’s certainly a move in the right direction. The first half of ‘Fire Dies Down’ is a downbeat affair, where a mournful violin wraps itself around a quietly sustained vocal, when an uptick tempo change suddenly comes from nowhere. Buoyant female backing-vocals kick in and guide the song to a dramatic and satisfying conclusion. The big surprise, though, comes from the stoner-rock guitar on ‘Warm Blood’. The Guitar Hero lead drops in and out of the song like a dive bomber and sounds fantastic paired against the wistful vocals and otherwise folksy aesthetic that previously defined Seabear’s sound.

It’s when Seabear stray outside of this narrow parametre that songs make their strongest impression. ‘Leafmask’ has a country and western vibe, with a slow-played slide guitar and accordion that work rather well together. The song loses some of its bite with its double-tracked lead vocal, which softens the edges on an appealingly rough-hewn quality. Sigfússon has a limited vocal range, but it’s nice to hear him stretch out on ‘Softship’, the nearest approximation of a straightforward pop song on the album. On ‘Cold Summer’, Sigfússon sings, "Your teeth too big for your mouth" over a plaintive piano melody, and then "I can see your eyes turn blue / I can see the weather changing you" coupled with a seasick violin and steady brush drums. It’s an interesting exploration of the beauty and the beast juxtaposition, even if recurring symbols of crooked teeth, falling leaves and unforgiving weather are a touch overused by the end of the album’s eleven tracks. Nevertheless, We Built A Fire is a giant leap forward. At the risk of sounding dismissive, I can’t wait to hear where Seabear goes next.