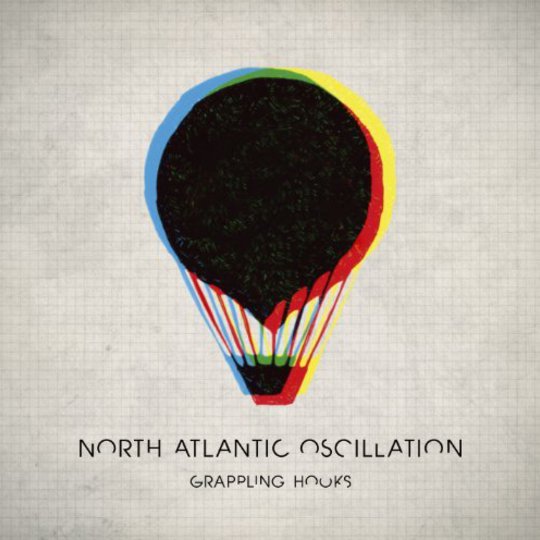 Mibbe it's just their name, but I can't think about North Atlantic Oscillation's debut album without thinking about water. It's in the depths and swells of their song structures, the thin fluid sweep of their synths, and the drums which splash and spray across everything. North Atlantic Oscillation are an Edinburgh-based trio who eschew verse-chorus-story in favour of elongated washes, proggy effects and ever-inventive drumming. Grappling Hooks is an ambitious and accomplished-sounding record, that nevertheless doesn't hit the heights it aims for.

North Atlantic Oscillation's debut does excel in one area, and that's rhythm. Every track showcases drummer Ben Martin's restless impulse, stretching for fills and rolls where a lesser drummer might content himself with four-fours. Fourth track 'Some Blue Hive' is a good example, the grand opening rolls giving way to a relaxed, lolling groove, before the flourish-dotted outro that grabs tight to the song instead of letting it drift. Next is 'Audioplastic', a cinematic near-instrumental that rides atop a stuttering, shifting rhythm like a milder version of Primal Scream's 'Blood Money'; it just wouldn't be possible without a good drummer.

Whether North Atlantic Oscillation have a good singer is a more awkward question to answer. Sam Healy's androgynous vocal tone is nearly always filtered and in falsetto, giving it an otherworldly sense which works best on lead single 'Cell Count': his deadpan "it's amazing what they can do... to you", delivered over skittering flashes and whirrs, sounds like an alien observation of human science or the politics of power. But in other places his lyrics are unclear, or his delivery reserved, rendering his effected voice an instrument among all others, like a different tone of synth. Of course, its potential is to be far more expressive, so it isn't used to the full here.

There's nothing especially new on Grappling Hooks, but North Atlantic Oscillation's borrowing isn't usually problematic. '77 Hours' is a heated-up and stretched version of Boards of Canada's 'Roygbiv' that slowly builds towards a manic climax, and it's the highlight of Grappling Hooks' second half. 'Ritual', on the other hand, suffers from its rather blatant Sigur Ros-isms: not just in the slow build-up and ecstatic release, but also in the high harmony vocals which sound suspiciously Icelandic as they're reversed.

Although that's the only track worthy of specific criticism on this generally consistent full-length, Grappling Hooks doesn't reward repeated listens with new discoveries. Its tempo changes and pressure shifts flow in mostly predictable sequences where a few deep dives or bends-inducing leaps would be welcome. For such a rhythm-based record - where other potential qualities like beautiful harmonies or gritty passages of noise or big choruses aren't so relevant - it should be aiming for extra points on the dynamics of structure.

The many reference points to other bands Grappling Hooks fits in - in addition to the forementioned, Grandaddy, Flaming Lips and Holy Fuck all make ghost appearances - suggest North Atlantic Oscillation's burgeoning identity is still more composite than characteristic. That's entirely understandable for a new band, and a minor gripe even at that. Grappling Hooks is a strong debut by a band who can get stronger.