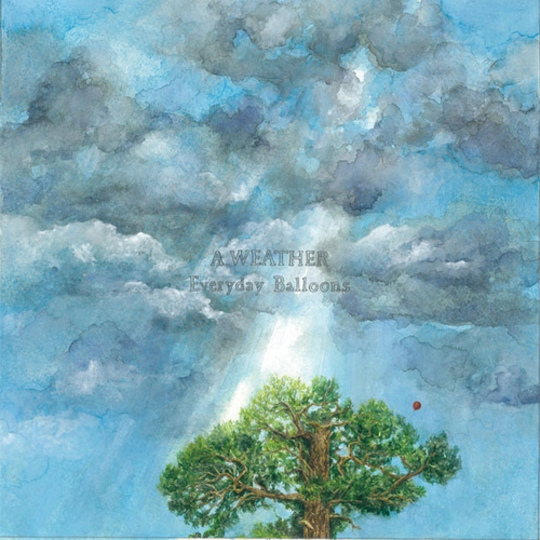 It appears that Portland's A Weather have made an effort to move away from the trappings of the tactics used in their 2008 debut, Cove. It may be to pushing it to say it's been a genuinely concerted one, but worries about Everyday Balloons teetering on the edge of 'maximum folk' have to be allayed slightly. Don't panic – there's no guitar shredding or screaming hordes of Japanese cult members, but it's essentially 'more of the same, but with an accent'.

Notable changes in approach are overdriven electric guitars which, if not exactly ploughing through the scenery, at least try to, with a modicum of forcefulness. Occasionally it goes unnoticed, but the added emphasis is welcome. The primary problem is that, for – or indeed because of – all this record's gentle harmonies and floating, fey instrumentation, the impact it leaves, on the whole, is minimal. It is quite easy to let sullen tones and delicately arranged instruments fool your ear and mind into appreciating serenity as substance. It masks, in this case, not necessarily an outright lack of quality, but definitely a lack of abundance in quality. Indeed, as nice-sounding – and 'nice' is the correct word, if ever an adjective was an embodiment of 'damning with faint praise' – as the understated vocal harmonies between Sarah Winchester and Aaron Gerber are, you end up wanting to add some raw power to proceedings. Unfortunately, this happens not very often, if at all.

It is not a release totally devoid of merit, however. When a more simplistic tack is taken, it amplifies what A Weather offer, a point no more evident than in 'Midday Moon', which is Winchester's – and the record's – finest moment. The downbeat, breathy vocals dance openly with flat and rich piano chords, in a three-minute lament, coming off like a fragile, broken Emily Haines. It's as though, having shaken off the shackles of the duets with Gerber, both a freedom and subsequent sadness is found.

The appeal in Everyday Balloons, however, lies in darkness. The glummest progressions are the moments which genuinely tug at the listener's earlobes - 'Fond', 'Happiness' - rather than lifelessly caressing them. Unfortunately they're emphatically not in the majority.

Despite the fleeting cracks of substance scattered about the place, the meandering predictability seriously blights passages of play. There may be an emphasis on both melody and harmony, but there is little which remains in the consciousness immediately afterwards, and even less which sticks for any serious length of time. The six-minutes plus of opener 'Third Of Life' is at least twice as long as the attention span of any right-minded listener and, although it changes, twists, turns and shifts form more than anything else, finisher 'Lay Me Down' is likewise a little lengthy.

I don't think anybody honestly expected an especially adventurous tack from A Weather on Everyday Balloons – that's as much a problem with the indie-folk genre and isn't a complaint to be levelled too harshly at the artist. Some exponents of this genre can leave their work too much to take in, but that is not a problem encountered here, as you'll want, nay, need more. Frequently, that extra something is promised, but just when the time is right for a bold dynamic change, for the music to soar: nothing. A Weather may not go over the top but they take understated to new levels, leaving no lasting mark.