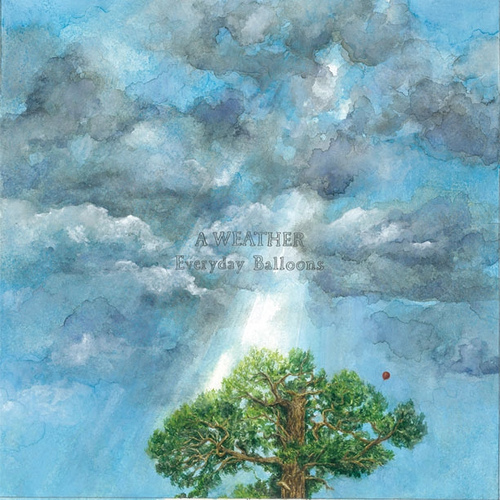 Despite the fleeting cracks of substance scattered about the place, the meandering predictability seriously blights passages of play. There may be an emphasis on both melody and harmony, but there is little which remains in the consciousness immediately afterwards, and even less which sticks for any serious length of time. »

two years after the critically acclaimed 'cove', portland oregon's a weather release 'everyday balloons' another collection of scrupulously crafted indierock songs, rife with intricate vocal and instrumental beauty. there is the same depth and mystery that lent 'cove' such staying power, but the songs on 'everyday balloons' collectively radiate a new intensity and intimacy at the heart of aaron gerber's and drummer sarah winchester's perfectly-matched
musings. their two voices (his: sleepy, serene and hers: emotive, effulgent) meet for moments, entwining, before carrying on their specific courses - and swirling string-sounds, organ and analog effects enrich the band's core instrumentation: winchester's precise drumming, bassist lou thomas's jubilant melodies, and the hovering, spare guitar work of aaron gerber and aaron krenkel. recorded by adam selzer (m ward, norfolk and western, the
decemberists), the restrained, simple production leaves room for a band interested in nuance even as it branches out int complexity; here into barely controlled noise, there into a winking, teasing delicate counter-point. this is the sound of four people in a room. this is the sound of the sacred, humble and hushed. on team love.
description from www.roughtrade.com