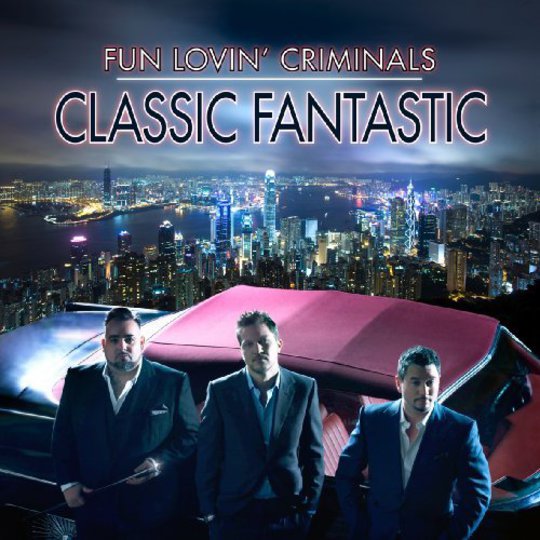 During the five years since their last album Livin’ In The City, Fun Lovin’ Criminals have indeed found themselves in the dock. Which might seem to be life imitating art were it not for the fact that they were fighting a court case with a former manager they fired, rather than defending themselves over the sort of nefarious criminal escapades they described in ‘Scooby Snacks’. Singing ‘so then we gave the sucker his P45’ just wouldn’t have quite the same glamour as "she gave me the loot / with puckered up lips".

The trouble is, listening to the court notes from that case might actually be more interesting than Classic Fantastic. It would certainly be different, which is something you can’t say about Huey and co’s sixth album, dressed as it is in exactly the same Noo Yoik wiseguy garb as all their albums since 1996’s Come Find Yourself. Their gangster playacting has been lapped up by European audiences even if it has had them laughed out of town at home – possibly quite literally now that all three of the Criminals now live in the UK, where Huey now has a slot on BBC6 Music. Not that you’d really know that he, Frank and Fast were honorary Englishmen from listening to Classic Fantastic since – apart from cameo appearances from Roots Manuva and Paul Kaye and one incongruous use of the word ‘shagging’ – Fun Lovin’ Criminals are still playing professional New Yorkers to the (made) man.

That might cause a credibility problem for other groups, but the fact that Fun Lovin’ Criminals were always a cartoon pastiche of the Goodfellas lifestyle was always central to their appeal anyway. But however thickly they continue to ladle that schtick on for Classic Fantastic, it’s now starting to wear pretty thin since – whatever else Huey remembered to bring with him when he moved – his formerly sharp lyrical abilities wasn’t amongst them.

Everything else you might expect from a Fun Lovin’ Criminals album – the hip-hop beats, slick guitar solos and jazzy interludes– have all survived, but it sometimes beggars belief that a man who once came up with such narrative cinematic masterpieces as ‘The Grave And The Constant’ or ‘The View Belongs To Everyone’ is now responsible for some of the woeful lines here. You’re desperately hoping that opener ‘Mars’ is just a misfire, but something like ‘How Low?’ is even worse, even the brief flash of inspiration in the hilarious couplet "I’ve seen this all like a thousand times / like that girl Kate Moss does thousands of lines" hardly disguising the fact that – yep – we’ve seen them do tracks like this a thousand times before, although never stooping so low as to rip off the ‘Soldier, Sailor, Tinker, Tailor’ nursery rhyme for the chorus. And somehow, the words "Yes it’s me and the FLC / one more time reppin’ NYC" in ‘We, The Three’ aren’t the most cringeworthy thing about that whole song. Plus, even though Roots Manuva hardly lives up to his reputation as one of hip-hop’s greatest lyricists on ‘Keep On Yellin’’ – texting in lines like ‘working the niche / with the elbow grease / increasing the peace’ – he sounds positively Byronic compared with Huey’s "It’s nice she said / spread it smooth like butter / on fresh baked bread".

Nor does the music really measure up to their past efforts, even if it’s not half as bad as Huey’s rhymes. Only the title track and ‘She Sings At The Sun’ really rank anywhere near their best, the former having a sassy summer soul swing reminiscent of Kool And The Gang or Bobby Womack, whilst the latter sounds like a distant cousin of Plantlife. Elsewhere, ‘Mister Sun’ has a certain foot-tapping funk and ‘Rewind’ a definite smoky cool, but much of the rest is at best a forgettable blur of lazy guitar riffs with a few brass bits thrown in. Like wiseguys at a card game Fun Lovin’ Criminals are desperately reshuffling the same deck here, but without anything new up their sleeves what they’re laying on the table looks less and less like a winning hand.