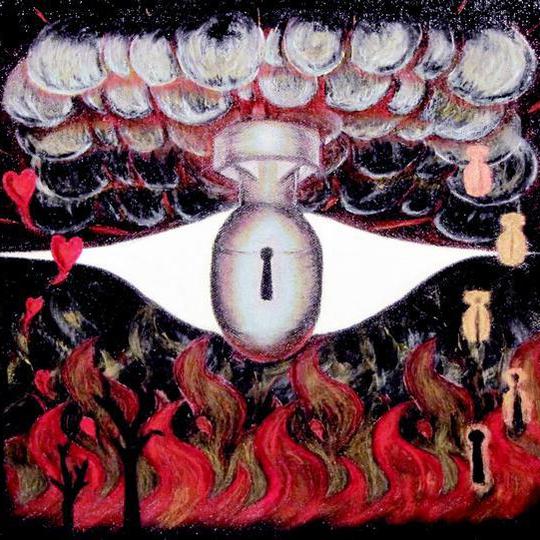 In the spirit of experimentation and storytelling, Misterlee (Lee Allatson of Leicester) is often unashamedly obscure. To call his dense, verbose lyrical style 'challenging' is to understate the point. His newest effort, this disquiet dog, does not readily reveal itself in passing and smacks of downright pretentiousness on first listen, but under the veneer of vocabulary lies a raconteur who is at times genuinely engaging. On his fourth EP Misterlee displays his undeniably British, self-aware sense of humour but is rarely funny in a 'knock knock' sense, instead inspiring the kind of surreal WTF laughs you might expect from Trout Mask Replica or 'Don't Eat the Yellow Snow'. Bolstered by unorthodox production techniques that rival both Beefheart and Zappa, this disquiet dog places an emphasis on deep reverbs and heavy delays at unexpected moments and is full of surprises, many of them very loud and confusing.

Starting an album with a track about a man who "thinks he was Adolf Hitler in a past life" is undoubtedly a bold statement. About what, I'm not really sure, but bold nonetheless and a fitting beginning to an eight track set that deliberately puts the listener outside their comfort zone, for better or worse.

'Stags of Schipol' is a tale of lust and excess in Dutch alleyways, beginning with "beer and breakfast / Two eggs / In cub scout-like preparance", passing through a stoned collapse in a pizza restaurant and a bout of violent anger characterised by discordant, enigmatic prog guitar and distorted vocals, and ending with the surreal image of the crying ghost of a Dutch sailor. Misterlee concludes by paraphrasing Samuel Johnson (you know, that quote from Fear and Loathing).

While other tracks are tinged with a wordy confidence that could easily see them filed under spoken word, single 'Littleman (We're Alive Here)' is the first real clue of the band's supposed punk influence. It hinges on an energetic strummed acoustic guitar and a rocky refrain that almost sounds like a stripped down Queens of the Stone Age with added weirdness. The same can be said for 'Stay Down Luke' and 'Don't Kill Anyone Today', the latter being by far the most straight up offering on this release.

This disquiet dog always has a trick up its sleeve and sometimes feels a bit like a musical ambush for it – like some crazed eccentric jumping out on you in the park. Quite often a cacophony of sound gives way to a delicate, fingerpicked guitar line, or a cello, or an overdriven vocal sample, or a dog barking, or the brittle tick of a clock. As with many things labelled 'experimental', it sounds much better on paper than in practice and can lead to a vague sense of frustration on the part of the listener. While the strength of his imagination shines throughout, throwing discipline out of the window in the name of free-form expression is a move that is both liberating and restricting. That said, there are some great moments here, many of which arise unexpectedly from a primal sludge of noise. The deal breaker for me is that Misterlee is boring when in rock mode and a bit too out there when in spoken word atmospheric prog mode.