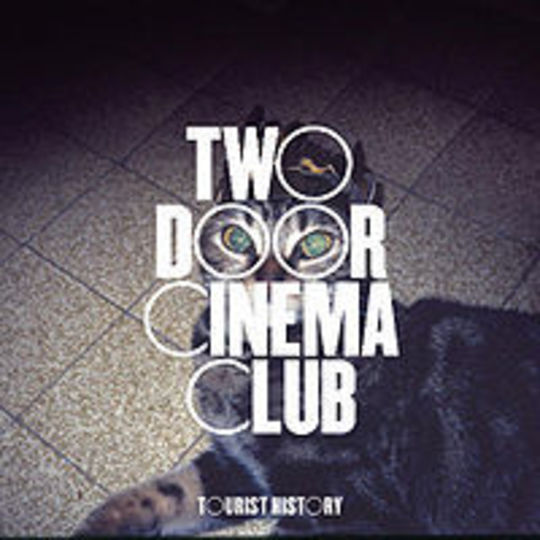 One would imagine the bedrooms of messrs Alex Trimble, Sam Halliday and Kevin Baird to be packed to the brim with musical memorabilia from the past decade. Dishevelled copies of NME and Q fight for floor space with well worn and slightly overplayed early editions of Silent Alarm and News & Tributes among others. Indeed, were Black Books set in three grotty bedsits in the Northern Irish seaside resort of Bangor it may pan out something like this.

Two Door Cinema Club, you see, are well-versed in the recent past. While it would be unfair to accuse them of flat-out plagiarism, there's no doubt they've spent their formative years studying the UK guitar scene of the post-millennium intently. Were it not for the fact that Tourist History actually takes several of the aforementioned artists' blueprints and turns them into credible happy-go-lucky pop songs, the Xerox Police would already have them fingerprinted, charged and ready for sentence.

As it happens though, the story of arguably Northern Ireland's finest three-piece since Ash thrust 'Jack Names The Planets' on Britpop's unsuspecting hordes is one of tremendous hard work and belief, not just in their own ability but in order to ensure anyone outside of their hometown would take them seriously. It's somewhat ironic that in a similar vein to Tim Wheeler and co., many of these songs were written while the band approached the end of their comprehensive education, and it is that air of youthful innocence and zest that lifts Tourist History out of the cheese saturated quagmire inhabited by the likes of The Wombats and their odious ilk who profess to peddle wares of a similar nature.

Essentially three men and a drum machine, Two Door Cinema Club are something of an anomaly, while their live performances possess an undeniably radiant surge of energy, something never easy to fully replicate on record no matter how experienced or reputable the artist(s) in question may be. Herein lies the biggest failing of Tourist History. If you happen to have caught them in the flesh, there is a nagging sense of disappointment that this album doesn't quite match the dizzying adrenalin rush of their show, while the slightly auto-tuned vocal harmonies can be a tad annoying in places. Likewise the intro to what would otherwise be Tourist History's stand-out 'I Can Talk', the "ah-oh, ah-ah-oh"'s shamefully rip-off The Futureheads in such a cringe-inducing way that any sane person will possibly want feel the urge to stick their head down a toilet or in a lit gas oven for thirty seconds at least. However, the song's ensuing two-and-a-half minutes more than make up for its cacophonous opening, mixing Bloc Party's guile and wisdom with a pop sensibility not normally associated with modern-day guitar oriented bands.

Elsewhere, the playful melodies of 'Undercover Martyn' and 'Do You Want It All?' merrily rub shoulders with the more introspective 'Something Good Can Work' and 'What You Know', each furrowing their way through the math-goes-pop shenanigans of a more accessible and less po-faced Antidotes into the bargain. 'Come Back Home' even reminds us of a time when Franz Ferdinand were considered to be the most exciting prospect the UK had to offer not too long ago, Alex Trimble's "Find the strength to find another way" refrain echoing more than a twinge of the Kapranoses about it. The closing 'You're Not Stubborn' could quite easily be attributed to Newcastle underachievers-that-should-have-been-massive Kubichek! in a previous life, its coda resembling the Geordie foursome's 'Method Acting' both musically and vocally.

Of course there is always a downside to having so many points of reference, namely that eventually one's own identity will become lost in the flotsam. However, with barely a duff song here bar the minor irritations mentioned earlier, Tourist History is an infectious debut that may well divide opinion, but at least suggests that amidst all the uneasy listening and obtuse noises coming out of the underground at present there are still those capable of writing the odd tune or ten.