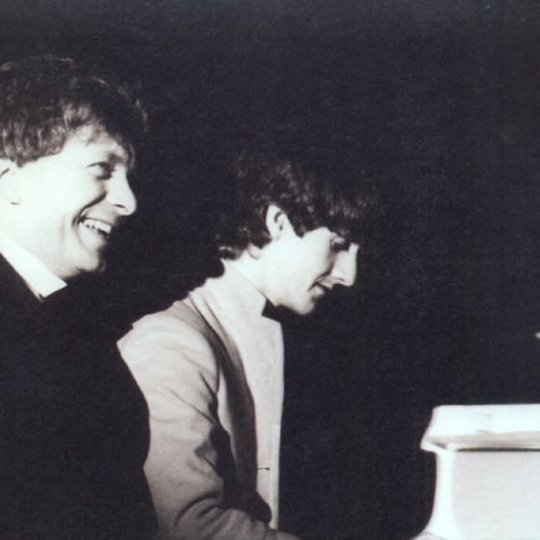 After Ian Curtis took his own life in 1980, one of the most poignant tributes was paid by labelmate Vini Reilly. “There was a boy/I almost knew him” he sang the following year on ‘The Missing Boy’, a track from The Durutti Column’s second album, LC. Thirty years on, the loss of a far closer ally has brought forth a more studied homage from Reilly. The death of Tony (latterly Anthony H) Wilson, who signed first The Durutti Column then Curtis’s Joy Division to his Factory Records, was keenly felt across the music industry. Its impact on Reilly, who was at Wilson’s bedside at the very end, ran much deeper, and while this work is explicitly signalled as a ‘paean’ – literally a song of joy or exultation – it is one etched in melancholy notes.

Reilly himself has always cut a somewhat spectral figure, and something in his playing has always been eminently mournful. There’s his tendency to pick away repeatedly at a single motif, wringing it of the full flow of its emotional content. Then there’s his predilection for drenching his sonics in reverb and echo effects so that we can hear them decaying and dying at the very moment of their construction. These are staples of Reilly’s wondrously inventive, exquisitely beautiful, extended guitar technique, but he uses them sparingly here.

Instead the album opens playfully, with a recording of Wilson’s voice asking: “Is this an art form or are you just a technician?” The first half of the sentence is clipped and phase shifted through the two sides of the stereo spectrum, a method borrowed from early tape works by Steve Reich, such as ‘It’s Gonna Rain’. It’s a witty rejoinder to Wilson’s sampled accusation – using technology to turn the words into art via a process used by a recognised great of modern composition. It’s also an uncharacteristically confident move from Reilly, placing himself alongside Reich: insisting, by extension, that his music is an art form. The memory of Wilson’s love of, and confidence in, his work is surely a key factor in Reilly’s assuredness. Wilson, of course, was right, and as this work progresses it repays his faith.

After the introduction of a taut viola line, the opener segues into ‘Chant’ replete with Wilson’s voice. A bass pulse plods inexorably and Reilly enters with clear tones shrouded in synths gradually added to with strange, incomprehensible female vocals and mechanical handclaps over the course of more than ten minutes. Its length, complexity and funereal pace are unexpectedly countered with next track ‘Quatro’, its gentle acoustic interplay of plucked, strummed and bowed strings calling to mind a stripped down Penguin Café Orchestra.

That tonal duality is a feature of the album throughout, echoing the personality of Wilson - the dapper TV presenter obsessed with punk, the intellectual dismissed as a twat. The darkness unsurprisingly returns on ‘Requiem’, consecrated with a searing guitar line from Reilly. Then there’s the joy: ‘Stuki’ sparkles with more tremendous guitar work complimented by finely nuanced drum programming from long-term Durutti Columnist Bruce Mitchell, and more of those intelligible vocals.

Elsewhere, on ‘Brother’ and again on ‘The Truth’, Reilly pits himself against the greats of pop and soul with an (oddly uncredited) partial resetting of the lyric to Marvin Gaye’s ‘What’s Going On?’. It’s a jarring reference on first listen – you wonder if it was picked as much as a personal favourite of Wilson’s as for the line about “too many good people dying” – but makes sense, like the other weird vocals, in the context of Reilly’s grief leaving him literally lost for words. It should be noted too, that Reilly pointedly doesn’t sing the lines himself. As he admits in the liner notes, the one thing Wilson couldn’t stand about The Durutti Column was Reilly’s voice.

The recording concludes twice: first in anger (with a recording of Wilson’s voice, railing against the current Labour government’s failure to address the poverty gap) then in resignation (a hidden track of deathly wind noise). The depth of Reilly’s loss is palpable. His ambition to honour his dear friend with a work “Tony would thoroughly approve of” appears amply fulfilled, but then who would know what Tony Wilson would have thought of it better than Vini Reilly?

A brief mention must be given to Heaven Sent (It Was Called Digital, It Was Heaven Sent) - six tracks dedicated to friends originally released on Wilson’s download-only F4 label in 2005 and included here as a bonus disc. The audio quality smacks of these origins - flatness of frequency, the odd glitch that could do with more careful mastering – but Reilly’s playing is imperious throughout. There’s a wealth of ideas from the proto-hip hop beats of ‘Keir’ to the delicate piano construction of ‘Anthony’. It makes a welcome supplement to what is an excellent addition to The Durutti Column catalogue.