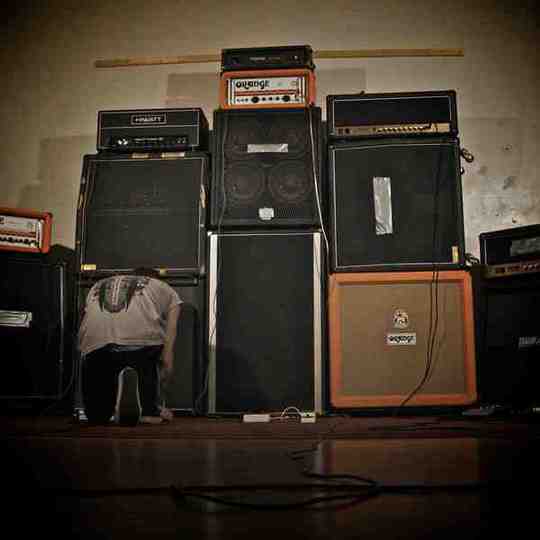 Holy Roar is really starting to pick up a reputation for signing aggressive bands with a twist. Probably the most well-known example is DiS favourites Rolo Tomassi, but increasingly the rest of the label's output is becoming equally compelling.

Throats, the first solo release from the band of the same name, promises to live up to this reputation – not least as they're billed in the accompanying press release as 'riff armageddon' and 'an entity like no other'.

In fact, there is an immediate reference point that you pick up almost instantly from the first chords of opener 'Wake'; the grandaddies of the UK death metal scene, Napalm Death. You see, the minute-long 'Wake' opens with a doom-laden intro, seemingly designed to create a sense of utter foreboding about WHAT IS TO COME – which is pretty much instantly decimated by the high-tempo barrage which kicks in after precisely 18 seconds. It's so fast and brutal, it's almost comical: like being headbutted in the nuts by Woody Woodpecker. Second track 'My Hands Are Cold' continues the assault, adding an undulating guitar line which seems to include some much-needed cohesion.

The charmingly-named 'Fuck Life' meanwhile, adds a bit of schizophrenic math-metal to proceedings, with echoes of Dillinger Escape Plan resounding through the opening seconds. Even so, the template is much the same – with drums clattering away at an incredible rate, teamed with muscular yet inventive guitar work and barely decipherable lyrics screamed over the top, escalating to a crescendo of barely-organised yet fantastically intense chaos.
In fact, if you had to pick one word that describes Throats' sound, it's intense. It's a good job this release only runs for 22 minutes - more than this would result in the barrage either becoming utterly unbearable or altogether less effective. As it is, they get the balance just right.

That intensity doesn't lessen up as the second half of the EP begins with fourth track 'Failgiver'. Indeed, on both this and following track 'Something Low From This Way Comes', the band's hardcore roots begin to show through, with a greater emphasis on driving rhythms and big hooks. These are clearly songs designed to ratchet a moshpit up to a frenzy of activity, and they're none the worse for it – although I personally wouldn't mind seeing less high-pitched guitar solo work at points.

It's closer 'Oaken/Wait' which really marks Throats out as something special, though. As the name suggests, it's a song of two halves: the first taking the frenetic barrage formula laid down throughout the rest of the record and taking it to its logical solution – ie insanely fast and brutal,coalescing into a chaotic and impressive breakdown. The second half, meanwhile, is based around a sludgy, downtuned riff, which hypnotically chugs its way into a minimalist outro that feels almost regretful at the end. There's more to this band than just rage and bile.

Saying that, this isn't a record for the unconverted: it's a pretty unrelenting assault from start to finish, albeit in a good way. It also isn't a record designed to to be sat down to listen to: really, it's a record to throw on at top volume and down cheap whisky to. Even so, if you do need to get something off your chest, I can't think of many better records with which to soundtrack catharsis.