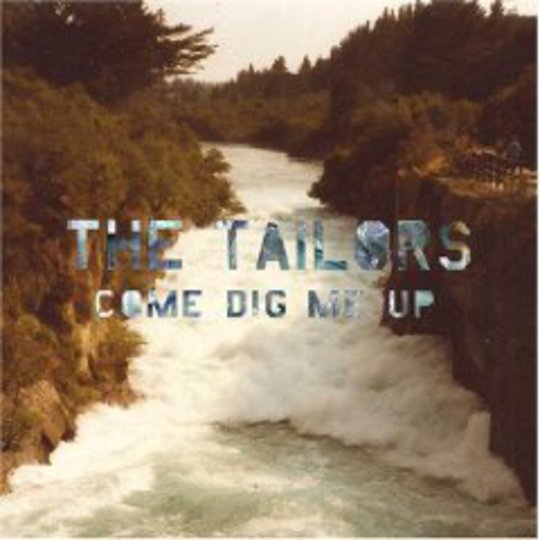 In my mind, mediocrity is the worst sin that you can commit if you intend to be a professional musician. I’d rather listen to something that makes me spit feathers about how appallingly bad it is than something which fades gently into the background in a banal, inoffensive way.

‘Who fucking cares?!?’, you may ask. Bear with me, it’s relevant. You see, Come Dig Me Up from London group The Tailors (I say group, but it’s essentially comprised of one Adam Killip plus a supporting cast of thousands) walks the tightrope between being a heartfelt paean to the travails of relationships and a mind-numbing ode to mediocrity.

The signs aren’t good to begin with: opener ‘Pictures of Her’ is a thoroughly insipid sub-Coldplay acoustic ballad, which largely brings to mind the image of one of those painfully cool blokes at parties who whips out his guitar at about 3am solely in order to pull. Things get slightly better with second and third songs ‘Bow Road’ and ‘Animal Humour’, with the former containing some similarities to a couple of the slower numbers from Apples in Stereo’s last album, and the latter contains some pretty fancy piano work.

The rest of the record, however, falls firmly between two stools: the respectably tuneful – such as the midpoint of the album, ‘Mush Love’, which also seems to be the high point, and ‘Forever Fade’, notable for the remarkably effective refrain of ‘cherry-coloured hair’ – and the instantly forgettable (I don’t think I could tell you what closer ‘Flying Blues’ sounds like, and I only listened to it about ten minutes ago).

The real problem with Come Dig Me Up is that there doesn’t seem to be any kind of emotional depth to it. I just didn’t connect with it at all – emotionally, it means about as much to me as a supermarket quiche does. Hence, I suppose, the need to use clinical terms like ‘effective’, and ‘respectably tuneful’ to describe it. There’s no edge, to this album: well, perhaps edge is the wrong term – but at the very least I’d hope for a bit of passion, a hint of longing, perhaps the occasional crack in the perfect voice. Instead, you get a pitch-perfect, glossy half-hour of music that wouldn’t sound out of place being played in Debenhams.

Maybe that’s a little harsh – there are a few moments in this album which do stand out. However, the vast majority of it is neither memorably good enough nor memorably bad enough to lodge in the mind. Essentially, it’s musical Teflon – competent and perfect for homewares, but completely non-stick and in no way anything to get excited about.