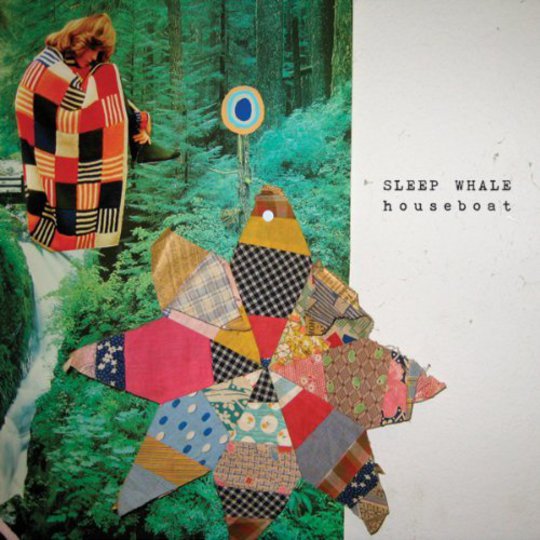 It’s slightly distracting to review a new release against the close of another year, when retrospective chat about the prior 11 months has already risen to fever pitch. There’s always a chance that wading through the contextualizing fuss and bluster that dominates might lead you to come out the other end, misguidedly comparing a winter release to the fare of the preceding months. Which seemed an easy place to start with Houseboat, the debut full length from Texans Sleep Whale. On the first few listens my muddy first instinct was to stand it up against numerous matching textures and hues from the previous months (years even, seeing as we’re also filing away the decade) and feel that it didn’t quite measure up, just doing enough to pique curiosity for recurring spins but never coming close to the depth of feeling inspired by similar ‘psych-folk-pop’ sounds that were already inked in under various ‘Best of…’ columns. But realising that these are the instincts of an idiot and an unfair way to judge an album, I kept coming back to it with impartial ears until the realisation that it, in fact, an album full of ideas and beauty and not, as it would first appear, underwhelmingly redolent of sounds past.

Because the most important thing to say about Houseboat, (without wanting to stray into the realms of Newsnight Review wankery with talk of ‘layers’), is that it is a layered landscape that only unfolds as it’s slowly absorbed, full of sounds and sonic motifs that only hold sway after the post-rock cymbal crashes and drum rolls have made their mark. The first few cursory listens feel a bit like watching the final epic moments of a film without taking in the scenes played out before the denouement. Without a grasp of the pace of the build up, the closing moments singled out come off as contrived and cloying in trying to extort as much emotion as possible. And the same can be said here where the peaks and rising swells alone are not enough unless taken in with the surrounding sketches of sound that exist as something almost resembling vulnerability when matched up against the more overtly expressive moments.

Opening track ‘Green Echo’ is a case in point, when one of the best moments of the song comes in the final minute where the fading ardour of the robust centre is washed away by a wiry guitar loop that flits and fades like falling sparks. Which isn’t to say that the moments before aren’t stirring, but only when fully comprehended in the context of the surrounding reticence until the full glory of the patchwork structure can be completely drawn out. ‘Still Drumming’ plays out this balance between echoing ambience and hurried beats perfectly; twisting and facing up to each other until slowly everything finally merges to form an elegantly impatient close. Another standout moment comes with ‘Roof Sailing''s shivering cello line and the way it mirrors the oxymoronic title of Wim Wenders stunning film by somehow simultaneously existing in a stupefying stretch of barren Texas desert yet also a rarefied and glistening Parisian skyline.

The press release states that the album is perfect for ‘a midnight drive down the freeway with your windows down’. But perhaps it’s more an album for watching a midnight drive down the freeway with the windows down, such is its cinematic allure. It’s an album that only fully exists in the details, but as they are slowly revealed, it’s often breathtaking in its mixture of wide eyed ebullience and tentative whisper, and, be careful to catch the irony here, an album easy to imagine belatedly charming itself onto people's Best of 2009 lists.