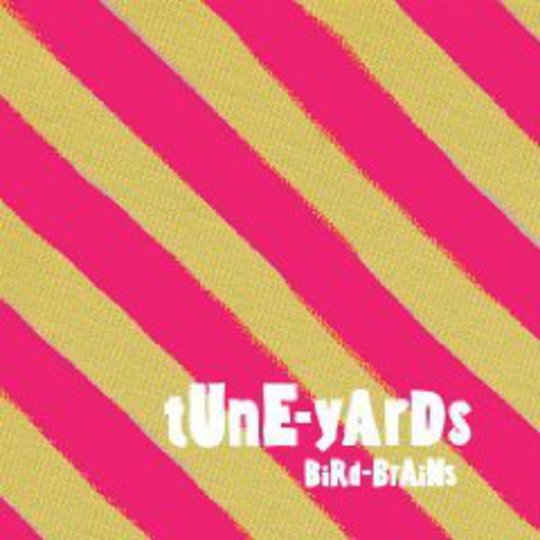 Lo-fi is a difficult aesthetic to get on board with at the end of the Noughties. When music technology is so accessible that any kid with headphones, a midi-keyboard and a cracked copy of Reason can sound like Timbaland, then the 'lo-fi' sound has essentially become an aesthetic choice. No longer borne of necessity, it used to conjure images of Daniel Johnston-esque musicians swinging tape decks alongside broken keyboards in bedrooms and family garages; the reality now is that lo-fi can be just as contrived and overproduced as a Rick Rubin jam. Thankfully in the case of tUnE-YaRdS’ Merril Garbus, the use of lo-fi is brilliantly unpredictable, and conversely becomes an artefact of music technology’s accessibility – it was recorded using only shareware programmes and a digital voice recorder.

BiRd-BrAiNs opens with ‘For You’, complete with tape hiss and tinny guitar picking that sounds like it’s straight from a field recordings anthology. Garbus's voice simmers before giving way to a spoken word sample. A drum loop announces second track ‘Sunlight’ and the eclecticism of the album is laid out, with Garbus sounding like a bizzaro world R&B star singing over a patchwork of forgotten pop songs and her signature tinny guitar. In the narrow mix the noise of competing elements mass like a storm before cracking as the song pushes in the red and Garbus calmly muses "I could be the sunlight in your eyes".

Her voice is consistently spectacular and androgynous, on some level recalling Dirty Projectors’ Dave Longstreth; indeed it’s no surprise to hear that Garbus is touring with Dirty Projectors. Both artists deploy the kind of R&B vocal methods that have been the biggest unspoken trend in indie music this year – the circle completing itself recently with Solange Knowles' superb cover of ‘Stillness is the Move’.

On ‘Lions’ Garbus pits a deep overdriven drum sound against thin fingerpicked guitar. Clipping vocals flood the mix, carried along a stream of tape hiss before a chorus hook showcasing one of the albums poppiest moments comes out of nowhere – the line "When you tell the lions that you love them so" is one of this writer's favourite sing-a-long lines of the year. The fusion of folk elements and sonorous bombastic rhythms is a trick repeated with further success on album standout ‘Jumping Jack’, which attempts to find a middle ground nobody knew existed between R&B and the forgotten Khmer pop of Sixties Cambodia (as recently rescued from super obscurity by hipster approved label Sublime Frequencies) with mallet-struck instruments occupying the top end of the mix as overdriven bass and drums propel Garbus’s possessed wailing into the stratosphere. The result inspires tangible feeling of excitement driven by the discovery of new sounds in a musical landscape dominated by pastiche and reworked genre movements (have we reached grunge again yet?).

The most irritating part of tUnE-YaRdS – the ridiculous caps lock frenzy of the name - is actually its most representative element. The mixture of small and large, of huge bass and tinny treble sounds is the most consistently evocative lo-fi trick on the album. It’s one that recalls The Microphones at Phil Elverum’s best, or sounds at times like a lo-fi reworking of the most memorable moments of The Flaming Lips’ The Soft Bulletin’. BiRd-BrAiNs is overlong at 53 minutes, but with so many rabbit holes and curious moments, any quieter moments spent digging for this gold is forgiven. On this record, Merril Garbus manages the impressive feat of condensing much of the decade’s more interesting musical trends into one very well delivered tapestry.