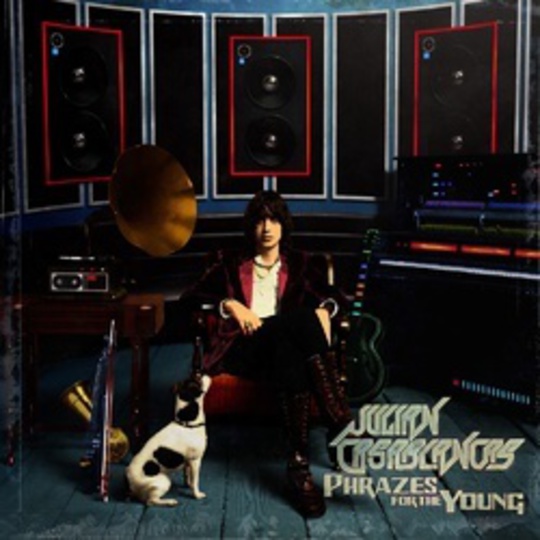 As a musical reference point, people have the Eighties all wrong. Comparing new music to an entire decade is a pretty careless move to begin with, but the new artists that attract the comparison tend to be a world away from the spirit of synthpop, the genre that supposedly defines the period. Just because Little Boots, for example, uses some keyboards, it doesn’t make her music ‘Eighties’.

This infuriatingly homogenised take on ‘Eighties’ looms large as the cop-out reference point for Julian Casablancas’s first solo album. He’s the fourth Stroke to release solo material of some kind, and his record emphasises synths, drum machines, and a poppier approach than that of his parent band.

Unfortunately rather than evoking the thrill of Eighties experimentation, Phrazes For The Young smacks of a 1982 Tomorrow's World vision of The Future. Whoa! People are using computers to perform daily activities like toastmaking, and spelling with scant regard for tradition or accuracy! I picture Casablancas creating it holed up in a studio that resembles the Tron-indebted video to '12:51'.

There’s a contrived naffness at work throughout Phrazes which sits uneasily with Casablancas’ obviously accomplished songwriting and the strength of his voice. 'Out Of The Blue' features Talking Heads-inspired evasive drums, a horrible melody, breathless Strokesy guitars bubbling under, and ingratiating double tracked vocals. His voice is so processed on ‘4 Chords Of The Apocalypse’ it seems his strangled mechanical larynx is doing a pre-emptive Auto-Tune job. It’s faintly reminiscent of The Greatest-era Cat Power serenading herself with mournful soul numbers, but the giddy rent-a-carnival sounds in the chorus are a typically needless and showy addition.

I guess he's tried to make a party album, but it's a party where coked-up nobodies are shouting over one another, desperate to say something impressive. The elements on single '11th Dimension' are all fine: a sprightly MGMT-like leading synth line; New Order-style high bass flourishes, and deep melodic drums that suggest someone's given Julian a dubstep comp. It feels, tight, agitated, sweaty, rather than pleasantly brimming over with parts left to flow organically. There are clearly a lot of good idea ideas here but they're not working together in any coherent way, and with so much happening it's a busy, unpleasant record to listen to, not helped by a painfully loud mastering job.

Part of the charm of synthpop classics like The Human League's '(Keep Feeling) Fascination' is that the equipment is audibly shoddy. It's hard to recapture the warped-sounding synths of its intro, because modern electronic instruments are built a lot better, and Casablancas’ experimentation with them comes off as charmless and occasionally smug. To be fair there's not much that sounds like this. It's a hubristic, aloof and pretty unexpected album. It’s also thankfully brief at eight songs and just over 40 minutes long.

Phrazes... ultimately comes off as a half-fascinating electronic curios from a rock musician, in the vein of Neil Young’s vocoder-heavy Trans album or Paul McCartney’s ‘Temporary Secretary’. Those were artists bravely dabbling with new electronic sounds, but MGMT and a ton of other artists smeared with the ‘Eighties’ adjective make synthplay borderline rote these days.

There are moments which hint at Casablancas’ underlying skill as a writer on Phrazes, but there’s such a ruinous deployment of disparate ideas that they never form a cogent whole. As he sings on ‘11th Dimension’ Casablancas has "music comin' out of [his] hands and feet and kisses woooo!" Fair enough, but it’s probably best not to use ALL of it, ALL AT THE SAME TIME isn't it, Jules?