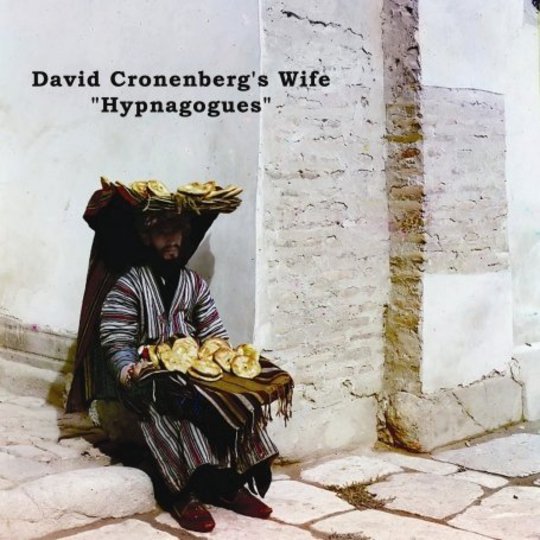 Unless you're Devendra Banhart, the difficulty of whittling the 20 or 30 songs you've demoed for your record down to the requisite number, and then listing them into the perfect flowing order cannot be overstated. Some foolishly topload it, putting all the planned singles at the beginning so no one listens past track five. Others are more sensible, and place the hits at regular albums, and put the best track at seven. These are called classic albums by the lazy. But what to do if you have one song that stands so far out from the rest that it encumbers the rest of the album with mediocrity in comparison. The Walkmen, try as they might, will never better 'The Rat', so as good as the rest may be, they burn into ash in its dazzling brilliance...

And so it seems for David Cronenberg's Wife, who open Hypnangogues with 'Sweden'. “The elixir of life is Omega-3 fish oils / I go into pubs and order pints of it / Still feel fucking awful / But now I'm going to live 'til I'm 124.” Tom Mayne's sneering monologue makes it seem like a lost Fall track, the pace gathering beautifully towards the finale. It's a little bit marvellous, full of bile and malevolent spite. If the whole record had followed the same path, it would have been shouted down as derivative like Mark E Smith at his vocal throttling best. On its own it stand up as one of the year's strongest tracks.

The dark desperate incantations of 'Body To Sleep With' are almost creepy in their intensity, with the pace changes and throbbing bass creating a Halloween ball feel. 'Jailbird' fades out into a blaze of driving fiddles. These are the strong tracks. The problem is that the rest of the record displays little of that vim and vigour. 'The Lou Reed Song' is slower, and only redeemed by the almost perfect line “I don't want to join those boys at the 'Fuck Me, I'm Sensitive School.'” They say words are all powerful – the tired songs sprinkled too often through this record are rescued again and again by brilliant lyrics. 'Drawn Again' wearies on and on, but is livened by the theatrical pun “She was reading Stanislavski / But I couldn't act natural.”

Only 'Desperate Little Man' manages to make the slower song work, its delicate hushed vocals telling of a lover gone astray with “a railroad man”, soft backing singers making it quietly heartbreaking, the bitterness of earlier replaced by pure melancholy.

Better is the 'Fight Song', with its backroom brawl feel, organs and a rolling guitar riff giving the album more movement. This is all instantly taken away on 'In The Limo', a slump in a rocking chair on a country stoop, which would all fall down were it not for the violin holding it together. It's too fey, with none of the darkness DCW do so well. The two song archetypes - mellow and downbeat or sinister and raging - create an album that doesn't flow as well as it could.

'Make Me A Channel Of Your Peace' is, yes, a reimagining of the hymn. No 'Millennium Prayer' this – it's all noir, the theme of abandoned lover deployed again – “Let me balm my head against your chest / You can lip my griefs away.” A hypnagogue is defined as 'an agent that induces drowsiness or sleep'. The record's recurring themes of a heartbreak and desire for that same person suggest that Mayne may have been making use of the ol' downers at the writing stage. There are few things in love more upsetting than an empty bed at night. There are few things in music more upsetting than a top loaded album that promises all and only occasionally delivers. On Hypnagogues, David Cronenberg's Wife sound at their best when they get the pace up, and at their very best when they sound like The Fall. Too often the album slips into solipsism and acoustic meanderings.