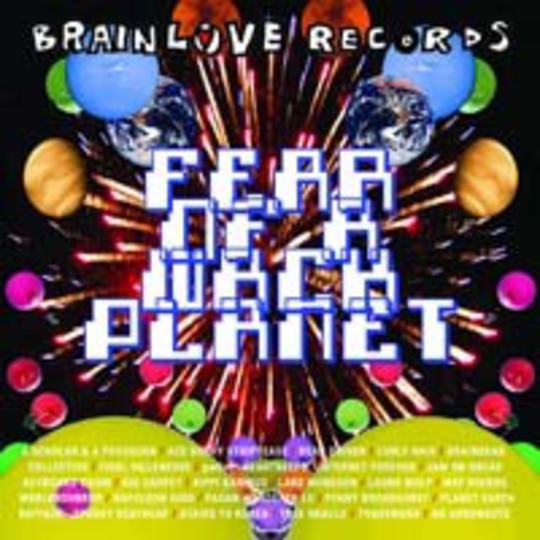 The music underground, particularly in London, is a funny ol' world. The big characters that abound are matched only in size by the unswayable strength of their opinions: what comprises good music, what's unacceptable – after all, one man's transcendental math-rock opus is another's brazen wankfest. You'd be hard pressed to find an indie label where all the bands get along, never mind a label boss that can resist launching into a scathing aside about a 'rival' after a couple of pints down The Old Blue Last.

Whether or not the Brainlove collective spend their energies on such counterproductive backbiting I have no idea, but you'd suspect not on the evidence of the nattily-titled Fear Of A Wack Planet; when everyone's a black sheep it's okay to herd. And that's what makes the label's latest mix such a screwy, engrossing listen. Nowhere else could acts this diverse and unique coincide in a way that wouldn't make you wonder who the hell spiked your coffee with Lucy while your back was turned.

What ties this together is that these are all ideas bands. Their primary pursuit is to create something that doesn't conform to the standard, which makes musical tradition something to be wary of. Who could blame them after so much of the mainstream has been clogged with pale facsimiles of largely wretched originals for so long? Far better to create your own rules and start afresh.

So it is that the joyful, trumpet-led indie of We Aeronauts gambols meekly alongside the stomping electro-pop of A Scholar & A Physician (whose 'Stand Tall' would be storming the top ten as I type, were there any sense in the world) and brooding Icelander Kippi Kaninus weaves out his hypnotic 'Sygyt With Me' just down the hall from Casio-wizz Kid Carpet's fidgety 'Go Get Yourself A Hammer'.

Few people will fall in love with absolutely everything here, nor should they expect to. What can be appreciated is the unity of purpose that overrides something as inconsequential as genre. At the very least, this is a welcome introduction to some fascinating new talent from the likes of soon-to-be-cherished Yorkshire upstarts Bear Driver and East London's compelling lo-fi trio Internet Forever, as well as many, many others. Fear Of A Wack Planet encapsulates all that is vital about the spirit of underground music in 2009, compiling it in a way that defies logic, yet ultimately makes perfect sense.