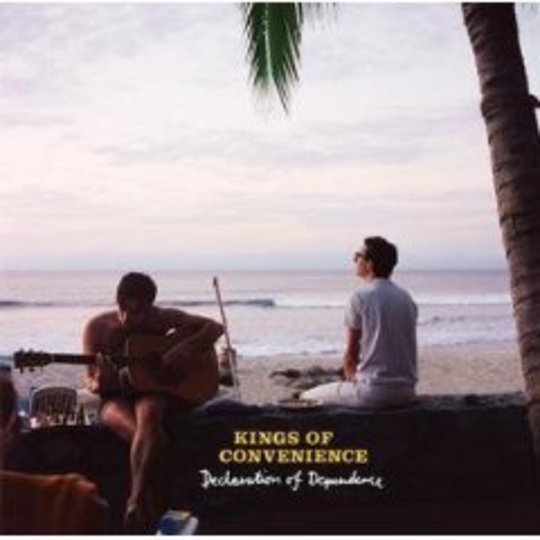 Kings of Convenience are the Daft Punk of acoustic music. When Daft Punk’s epic Human After All came out after a five year wait the deceptively simplistic techno loops had just about everybody confused – how did it take seven years? At five years since their last LP, Kings of Convenience are just as prolific, and their minimal approach is just as deceptive. How did it take five years to come up with Declaration of Dependence? The question answers itself with each new listen, as tiny details and methodically charted rhythms reveal themselves.

The set opens with the uncomplicated ’24-25’, a sparse exercise in Simon and Garfunkelisms draped in gorgeous fingerpicked patterns. Paul'n'Art comparisons are often fired at the duo, but it’s a smart reference, not mere aping, an acknowledgement that their music has a huge nostalgic rush in its veins; by channelling that which is almost the very sound of nostalgia itself – wistful longing for lost summers, loves or friends the band capture exactly the mood the lyrics call for. The blueprint set down by ’24-25’ is one that serves the band for the rest of the album – as it has on all of their previous work.

Their rigid approach might seem strange considering Erlend Øye’s well documented musical travels. Indeed, his part as one-half of Kings of Convenience is almost eclipsed by his endeavours in electronic music – his DJ Kicks disc is to my ears the best thing he has done – something that you might have thought could crossover into Kings of Convenience at some point. That it hasn’t so far suggests that the duo’s dogmatic stylistic approach is unwavering for a reason.

‘My Ship is Not Pretty’ is the furthest away from the shoreline of comfort that they get, and it’s a shame, because it’s also the strongest track on the album, Eirik Bøe anxiously sings ‘The telegraph gave us hope/ Before was the silence and the panic it brought / The sky was the blackest sheet / We drew lines upon it, so our thoughts could meet’. It’s not the standard nostalgic fare that Kings of Convenience have perfected over the years. It’s tinged with darkness and depth - the space and sparse guitar recalls the way Scott Walker evolved his chamber pop into an entirely different beast – and to hear the duo deconstruct the style that they have honed so perfectly is exciting; that it is an anomaly on the album is frustrating.

If ‘My Ship’s Not Pretty’ closed side A then it’s possible Kings of Convenience could have stretched their legs over Side B into new territory, or torn down their comfort zone as many bands have done to rousing success over the past decade (Modest Mouse on Moon Vs Antartica or Wilco’s modern classic Yankee Hotel Foxtrot) but the band bottle it and the promise of ‘My Ship’s Not Pretty’ is proved to be a one-off as the band make hard work of pretty but unremarkable songs on a punishing latter third of the album – the duo aim for big sentiment on tracks such as ‘Freedom and its Owner’ and ‘Scars on Land’ but fall short as the album plods to a disappointing close.

Some of the disappointment with the latter half is the fault of such an enjoyable start to the album. The album serves as a classic case of frontloading and one gets a sense that the first six songs would have made a better standalone EP, buying the band yet more time to craft something a little more interesting. Three albums in, and after almost ten years the band’s creative flow seems to have pooled – and with the limited nature of acoustic music the song itself is often not enough. If Kings of Convenience could find a way of presenting their music like late-period Elliot Smith or Wilco at their best the duo could be canonised with artists such as Scott Walker or their beloved Simon and Garfunkel. As it is they are danger of losing their charm to complacency.