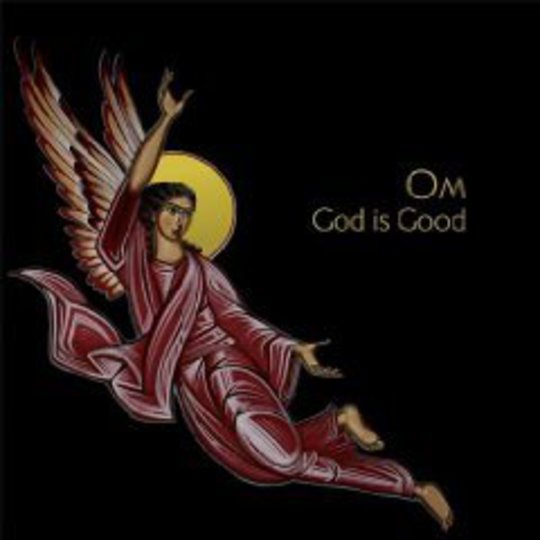 God is Good. As catechisms go, it’s fairly direct and to the point. It echoes the connotations of the name of its creators OM: simplicity, tranquillity, serenity and harmony. In fact I’d wager a bet that there’ll be few more ‘spiritual’ album and artist names than that of OM’s latest record to be found in the section entitled ‘metal’ or ‘doom’ or whatever moniker a record shop has decided to label that dimly lit, slightly smelly and stale corner devoted to the tastes of the pale, the bearded, the tattooed and the pierced.

The fact is that Al Cisneros and Chris Hakius brought more than just the smell of high-grade marijuana with them from their former outfit, legendary stoner rock titans Sleep. They also carried the trudging, rhythmic pilgrim’s pulse that gave the San Jose band such quasi-religious purpose. Over the course of their three albums following Sleep’s demise, they painstakingly chiselled a route across the metal and doom underground, their initial audiences consisting of those who’d dropped out of life with the bong in hand, but quickly swelling with others impressed by their minimal jazz like aesthetic – one friend of mine remembers seeing them back in the days of their Variations On A Theme album, where they played a full set, and then adjourned to the bar for an unannounced aftershow party in which they covered a set of Sinatra staples.

OM established themselves as both a separate and similar musical concern to their previous, revered outfit with their ponderous and considered approach to doom – and then one of them left. Maybe it was the five hour show in Jerusalem which wore Chris Hakius out, but come 2008 he had left the band, with Cisneros announcing that Emil Amos of Grails would replace the percussionist as a touring and recording member. God is Good, created under Steve Albini’s watchful eye, is therefore the first fruit from the new lineup. That it comes in the wake of a Sleep reunion; as unexpected as it was jawdropping, further adds to the sense of anticipation.

That Amos is more than just a like for like swap becomes clear from the very first seconds. The album’s centrepiece; 19 minute opening track ‘Thebes’ rouses itself with the haziest of stirs from a sitar, a new and surprising addition to the OM canon, especially given Albini’s preference for the ‘live’ sound. The track is laced with tones previously alien: a bowed, cawing zither competes with gently hypnotic tabla drums, but it is still quintessentially OM. It retains the reverent nature of previous outings: the chanted vocals that echo over the lumberingly plucked bass reference minarets, celestial forces, electric seas, and yes, the sweet leaf. When the track growls into overdrive it’s just as crushing as the band’s previous work: Cisneros’ bass sound is unbelievably thick and heavy, bringing to mind the inexorable advance of lava downhill, whilst Amos’ drumwork flurries and crashes without ever feeling superfluous. In short 'Thebes' shows there can be life after Hakius – an OM with the same essential groove, but with a few welcome new tricks up the druid’s sleeves.

The rest of the album veers sharply away from this template, with a more immediately pyschedelic sound on display. As noted, Amos appears to have brought a more expansive musical vision to the duo (along with some positively explosive percussion). The eerie minimalism of 'Conference of the Birds' has all but vanished by the final pair of tracks, companion pieces in name alone. ‘Cremation Ghat I’ rolls along on a bass riff that is positively light of foot accompanied by stomping percussion and masonic chanting, but its bigger brother takes OM right into the dark heart of the sun, droning sitars weaved over a bass sound which chimes rather than crushes. Even taking into account Amos’ background with Grails, this isn’t an entirely unprecedented move for OM – their music always carried a pyschedelic bent, but it was never so explicit as now.

The problem is that there’s an unavoidable disappointment tied up with the shift from implicit to full blown, which in turn lends the compositions a feeling of flamboyant levity ‘Meditation is the Practice of Death’ might start as a thundering juggernaut, but it ends with a jarringly lost flute solo. This is indicative of the album as a whole: where Pilgrimage ploughed ever onwards towards a smouldering conclusion, God is Good is a more confused creation, more like two EPs than a concerted record. There’s a sense; part fascination and part sadness, of hearing the old monolith OM crack and then crumble before your very ears. What rises from the ruins is at current too insubstantial to ascertain exactly what is being built anew and whether it will be as distinctive in it’s own right.