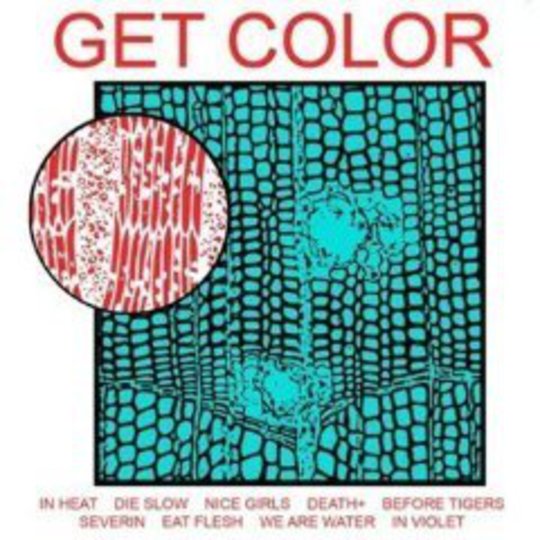 Weakly smiling at a man in a ‘YOU WILL LOVE EACH OTHER’ T-shirt, the latest in a series of men in ‘YOU WILL LOVE EACH OTHER’ T-shirts, all of whom had greeted me as a brother of sorts on grounds of my own ‘YOU WILL LOVE EACH OTHER’ T-shirt... I begin to feel vaguely despondent. It is ATP Vs Pitchfork, and we all seemed to be the same: uncool twentysomething males attempting to look vaguely edgy by sporting a garment that combines a budget price tag, allegiance to an up and coming noise band and a half-arsed stab at leaping aboard the fluoro bandwagon. I wasn’t even sure if really liked HEALTH. Yes, there was much to admire about their self-titled debut album. But it felt oddly underdone, a series of tantalisingly abrasive morsels rather than proper, meaty songs. And for all the abrupt shifts in pattern and tempo, it all came down to that triplicate palette of bouncy tribal drums, oddly phased vocals that sounded a bit like a lady robot dying, and a sort of weird feedback noise reminiscent of a runaway locomotive. It was good, but was it buy a T-shirt good? Or did I like the idea of the T-shirt more than the music of the band?

Granted, that’s a question of seismic unconcern to anyone still reading this, but I burden you with such blather only by way of stressing how utterly and totally more convincing Get Color is than its predecessor. It doesn’t so much represent forward progress as a wholesale upgrade, a record that leaves HEALTH virtually redundant.

In fact, maybe the upgrade already happened with the intermediary DISCO, in which a variety of remixers took the basic good ideas behind HEALTH and proceeded to spin them into actual songs.

Here the Los Angeles band need no such assistance, refining that basic palette into a fluid, spiky maelstrom of blood and neon, mirrorball and icepick. The most obvious achievement is that they’ve made such a pretty record; this is still identifiably noise, but it doesn’t feel born of rage or aggression or a desire to be ugly. ‘Die Slow’ may parade in on a thuggish riff that somehow folds back upon itself to create a very strange noise indeed, but come the chorus they’ve gifted us the release of some strobing, sexy, hands aloft synths. ‘Nice Girls’ is based around the gorgeous motif of three huge, hazy chords that sigh their way down an octave or so like a soft-descending veil of night. Six minute closer ‘In Violet’ commences like some lonely, spacewrecked machine trying to tackle Neil Young’s ‘Like A Hurricane’, before simply spending much of its length disintegrating beautifully in shards of angelically pure feedback and glimmering keyboard loops.

Perhaps the biggest step forwards is the introduction of emotion to HEALTH’s previously machine-tooled heart. Sometimes it’s quite hard to work out what the emotions are, but they’re unquestionably there: after a typical snarl of staccato noise, ‘Severin’ breaks into a nihilistic gallop of guitar and drums that cradles Jake Duzsik’s repeat intonation “all we lose, we learn from you”. Whatever removal of innocence Duzsik may be referring to or why we may be to blame is entirely unclear; but stretched over four minutes, that collision of end-of-days noise and quiescent sorrow is utterly intoxicating, a cocktail of molten music and sub-zero emotion. Paired with the running-on-empty flicker and roar of the preceding ‘Before Tigers’ and you have two tracks at the centre of the record that form a sad, pretty heart, one that pumps definition throughout Get Color’s slender half hour run time.

That’s what this is, a record with definition and character, a pointed move away from the nerve-frying, oft random lurches of HEALTH. It’s sad and beautiful and evocative, speaking of wrong science fiction and fallen futures. It doesn’t need a T-shirt to prop it up.