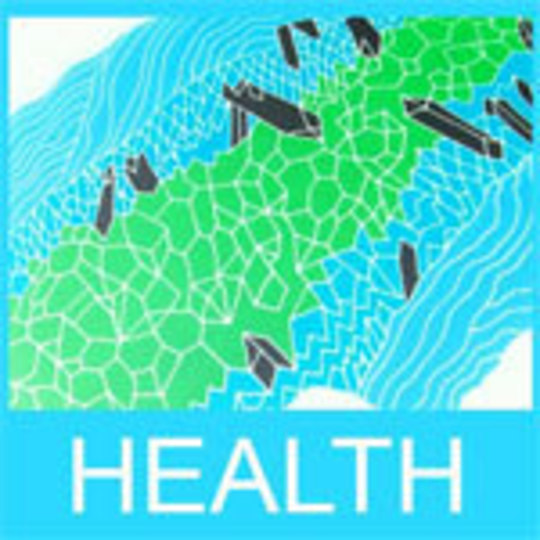 After 27 seconds of HEALTH’s debut record, drums wake up with a bang. The bang jars, throws your head back; echoing with a metallic clang the drum and stick become a jaw, the bang becomes your dagger teeth, scraping down and breaking on rusted shrapnel. 'Heaven' began with shimmering feedback, but that has been scattered and now washes over the woken rhythm like a mutant gravity; hung heavy and physical with some green emission.

There’s the first moan of sentient life; a wailing softens and hardens with drums that pick up and pepper splashes of cymbal, piss or oil marking tracks. In ‘Heaven’'s chiming rising there’s a feeling of invention, fresh terrain being covered. At its completion, it suddenly all fits. HEALTH have raized a world in two minutes, 37 seconds.

‘Raized’. ‘Cause I wanted to say this band share a primal-ism with bands like Gang Gang Dance, Drums...-era Liars but there’s a nagging doubt here. Drum's not dead - it died and came back again. This is post-something; tragedy, most likely - disturbing, threatening, dangerous and synthetic where what Gang Gang evoke is more organic. Health sounds like it’s tracking a new, post-world need for the tribe as life unit; as if the LA band have supplanted Hoban’s Riddley Walker to their hometown from Kent. Nu-savagery, imagine: sunk neon signs fished from the earth, Holy Wood rather than Hollow Way, God as a video camera, androids paddling tarpits.

Speculative, yes; pretentious, perhaps. I make no apologies for the abstraction. They’re a band much easier to conceive of in the flesh. Live, it’s a thing; an act – where on record it feels like practise and sci-fi could-be, onstage it’s do-or-die-out. And you realise that, fuck, there are humans behind this noise. BJ Miller, or 'Beej', sits behind the drums while Jake Duzsik, John Famigletta and Jupiter Keyes - he's the one who learnt about black magic off his mother - scrabble around between pedals, drumming on floors, pipes, monitors, howling/screeching/screaming/bleeding. There's small grace in survival.

Snap out, back to the record. After ‘Heaven’, _‘Girl Attorney’ disappears leaving half a minute or so of heaped noise before the three prongs of ‘Triceratops’, _‘Crimewave’ and ‘Courtship’ come clattering and shrieking onto the agenda. Guitars grind, shine, oscillate, do everything. Drums just pound. These three tracks showcase the lairiest side of HEALTH, each rolling into the next with wild, ricochet abandon, making divisions between tracks seem redundant. This is, after all, a dance record.

Rhythm is dominant throughout. Two battling drummers at once hopelessly pitched and united in the fight, like those two dinosaurs fossilized mid-scrap. Repetition struggles manfully, typically, to inflict order on proceedings until some brutal burst of voice, guitar or electronics bites into the loop, puncturing it and throwing the song wildly off course. The cycle repeats countless times on Health’s ten tracks, the only melody barely detectable, breathy; exhausted and euphoric at the climax or prospect of yet more rhythm. Lyrics - by the band's own design - don't matter, as long as they come from lungs that sound like they're bursting/burst.

But this carnage is cool - much of Health is tempered with the same cold warmth that the likes of Neu! had. This kraut-rock debt doubles with the borrowing of metronomes, and then there's detachment, which makes things even more psychopathic. See ‘//M\’, or the crushingly sombre ‘Perfect Skin’ for examples of this.

The album closes with 'Lost Time', the same track that opens sets in the flesh. A four-voice chant rises up, guitars sleep, drums just pound. It's restful, frightened; neo-tribalism when the camp fire's gone out - the thin line between good and evil feels thinner than ever and ears cling to its simple rhythm like a lullaby after the nightmare noises that shook before. HEALTH act the brave, but there's fear in the dark. The players are human, even if the world they raized seems alien, and the rhythms they make are innate as pulses. At its completion, it suddenly all fits.