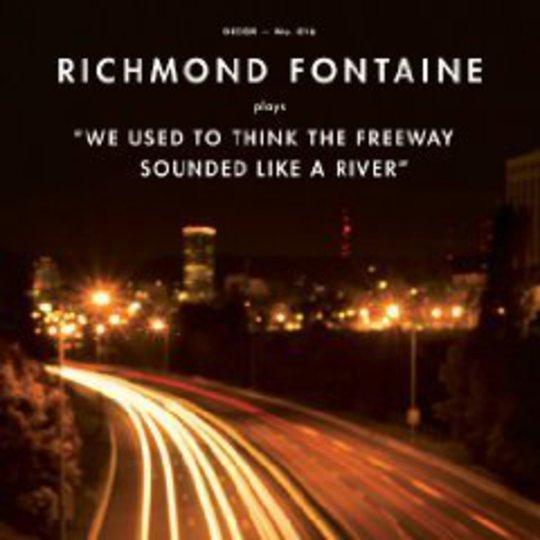 Full disclosure: in mid-2005, I spent a reasonably significant period believing that Richmond Fontaine’s sixth studio album, The Fitzgerald, was quite possibly the Best Thing That Had Ever Happened. And not merely in music; oh no. Just, y’know, generally. Penning it while holed up for two weeks in Nevada’s eponymous Fitzgerald casino, Portland-based author, frontman and acclaimed lyricist Willy Vlautin emerged brandishing an almost debilitatingly elegiac hate-letter to Middle America’s motel-loitering underclass of pimps, gamblers, runaways and lot lizards.

Recounting such fun family memories as the day young Willy and his father stumbled across the battered corpse of a local teenage debtor in a disused quarry pit, that record was implausibly and relentlessly bleak from its first gingerly plucked string to the dying croaky couplet. Indeed, several of The Fitzgerald’s petrifyingly stark, stripped-to-the-bone vignettes were overlaid with faint samples of a chilly midnight wind whipping around the rusting carcass of an abandoned railyard. It was a horrible, hopeless, utterly despairing howl of an album, and I absolutely bloody adored it.

Bemusement soon followed, then, when the rest of Richmond Fontaine’s back catalogue revealed The Fitzgerald to be something of an anomaly. Better-selling releases like Post To Wire (2004) and Thirteen Cities (2007) are much more prismatic in nature, wrapping elements of brassy pomp and piano-laced lounge jazz around their mid-tempo blues-rock spines. Frankly, selfishly, I was a bit disappointed...but happily, there’s hardly anything happy about Vlautin’s eighth effort. Grab a bottle of whisky and bucket of Prozac, misery-lovers - we may not quite be heading back to The Fitzgerald just yet, but we’re certainly going to be passing through the neighbourhood.

We Used To Think The Freeway Sounded Like A River opens with the spirit-sapping title track; a bruised, blurry Polaroid of a spoiled memory that recalls a time when Vlautin found himself living in low-rent paradise with an unnamed lover. Yes, there was an abandoned house next door, with a “broken pool full of shopping carts / A mattress and old car parts,” but they were making the best of it. Yes, they were living hand-to-mouth in the shadow of an interstate overpass, but it was ok: they were cosy enough in their bubble to daydream that the constant flow of traffic overhead was a sing-song stream meandering cheerily by, rather than a conveyor belt for a hollow-eyed army of spiritually bankrupt Midwest transients.

And then, without warning, the bubble implodes: “We came home one night, our door was open / Most of our things were gone or broken,” sighs Vlautin, defeated. “All our clothes were thrown around the rooms / And even our pictures were wrecked too.” In this one moment, suddenly the freeway becomes very much a freeway again. And, with the death of the daydream, the very scaffolding of the relationship is beginning to crumble. Cue the forlorn wail of a distant theremin, the rasping vocal drawl already imparting a palpable sense of its owner’s heart being crushed to the point of numbness. The album is a minute and a half old, for crying out loud. Are we having fun yet, kids?

Such is Vlautin’s talent as a storyteller, conveying everything about his disparate cast of punch-drunk, liquor-soused losers with just a handful of sparse adjectives, that moments like this manage to feel genuinely gut-wrenching without ever coming across as remotely emo: he writes harrowing documentaries, not bed-wetting poetry.

And, even in the few places where We Used To Think... kicks the shuffling tempo up a notch, there’s still enough grit lying around to de-ice Route 66. A perfect example crops up via the raucous, Mariachi-tinged 'The Boyfriends', wherein the narrator desperately struggles to absolve himself (“I ain’t like that / Please, I don’t wanna be like that...”) after boozing his way into a one-night stand during which the woman’s hitherto-unmentioned kid appears, cowering in the bedroom doorway.

Musically, Richmond Fontaine aren’t reinventing any wheels - there's a reason why they’re so frequently compared stylistically to the likes of Uncle Tupelo, and in fact Vlautin’s fondness for occasional dolorous washes of pedal steel or a bittersweet, chiming vibraphone actually make the resulting ballads feel less impulsive even than that.

That said, it’d be unnecessarily dismissive of Richmond Fontaine’s other four members - particularly percussionist Sean Oldham, who always manages to remain admirably sensitive to the mood of the piece without necessarily defaulting to syrupy brushwork - to say that the backing isn’t crucial to the overall impact of Vlautin’s burned-out, bust-up sketches of lives skidding off-radar under those giant Western skies. It absolutely is, and fans of bleary-eyed country blues will detect a reasonable depth of field on this record: the heavy-hearted cello sighing through 'Ruby And Lou', for instance, or the gossamer strands of violin lacing up the fractured narrative of 'The Pull'.

However, We Used To Think... is first and foremost an album for devotees of that tarnished, neon-lit, small town Americana of which Vlautin has pretty much established himself as the grizzled poet laureate. If you’ll sit spellbound through the pitiful story of a failing amateur boxer - “He’d borrow his sister's car to drive home / Shattered his nose, detached his retina in Fresno / So then they made him quit” - without longing for a moral resolution that clearly isn’t going to show up, then you’ll love this. Well, whichever parts of you it leaves capable of feeling love, at any rate.