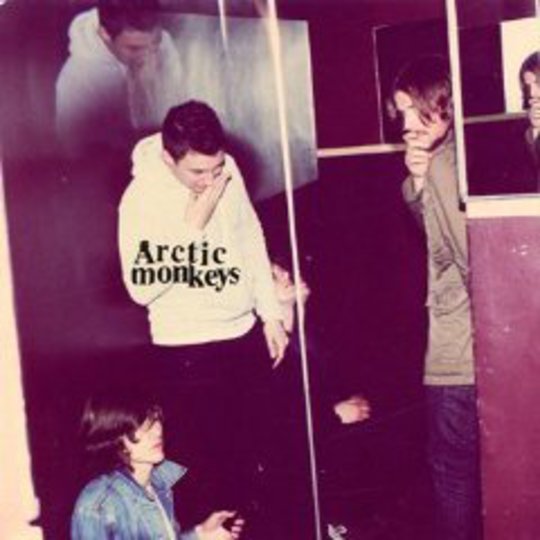 While the Arctic Monkeys may be a quintessentially 21st century band, Humbug is an album that presents the critic with a very old-fashioned problem. The abrupt uncommercial curveball record from a big-selling, once zeitgeist-imbued artist is a bitch to review upon release, because it comes weighed down with such distracting baggage.

What do you really do when confronted with opener ‘My Propeller’? Do you note that it’s probably the album’s most immediate track, that it sounds like Your Arsenal-era Morrissey, only a splash more sinister - reedy, off-kilter backing vocals, a bludgeoning drum crescendo - and a fair bit naughtier? (unless Alex Turner has developed some sort of unseemly biplane fixation, the lyrics would appear to basically be one big innuendo) Or do you rattle on about how Turner doesn’t sound even slightly like the quickfire kitchen sink laureate of old, note that it’s hardly a hummable pop song, ponder the potential influence of co-producer Josh Homme on the beefy musicianship and nudge nudge wink wink lyrics, consider how Turner’s stint in The Last Shadow Puppets may have impacted on the lugubrious pacing and then come to a conclusion about what this all means.

Is Humbug a gesture of bold artistry from a band that were never going to take the Oasis route, career-wise? Or is it the sound of a now hugely rich bunch of indie musicians dicking around? Is it really unexpected, or was an uncommercial album always inevitable from a band who've always been deeply ambivalent about their success? Will it be their Nebraska or their Landing On Water? These are big questions, ones that hurt my head a lot, and I’m going to do my best to ignore them completely. Let’s shear Humbug of context and try to pretend it’s just the work of An Indie Band, judge it on its own merits. Okey-dokey?

Humbug, by the Sheffield band Arctic Monkeys, is a dense, bassy, dissonant work, a mostly hook-free ten tracks that nonetheless avoids being an actively confrontational listen thanks to an outstanding grasp of dynamics, with even the most perverse songs possessed of a slow momentum and implacable build that generally sees them all arrive at something like catharsis, often taking a pretty fascinating route to get there. It’s possessed of as engagingly intricate set of backing vocals as you’ll hear on a British indie album all year, while the lead singer has a fairly nifty way with words (when you can actually hear him over the musical churn). It’s so far away from the formulaic approach and pitiful lack of artistic ambition possessed by yer average Brit guitar four piece that there’s a sizeable chunk of me that wants to praise the thing to the rafters. At the same time it finds itself weighted down by often being a dirgy, unemotional work, one that impresses often but drops the jaw never, with a misty, distanced feel that generally steers evens its most raucous moments firmly clear of the visceral.

That said, the record only contains one actual clunker, that being ‘Dangerous Animals’, a lumpen chug that arrives at the promisingly semi-melodic bridge line “I’m pinned down by the dark” before hurling itself bodily into the abyss, springing into a horrible chorus based around Turner atonally spelling out the song name, letter by letter. Gathering to a thick, throbbing build, we can allow ourselves enough context to note that it does sound a bit like something off the last QOTSA album, though, er, probably not one of the songs you still remember.

But the meat of Humbug lies with the likes of recent single ‘Crying Lightning’. Not the album’s catchiest track, but for sure one of its more emblematic, it’s a mounting panic attack of a song that ramps the tension up coldly and mercilessly until bursting through the darkness into a chanted plateau. It’s in that sense of musical build and final vocal release that ‘Crying Lighting’ really sets the tone. ‘Potion Approaching’ probably is probably the most impressive example, Nick O’Malley and Matt Helders’ backing tones morphing from murderous growl to a mannered train imitation, a ghostly Les Triplets de Belleville-style cascade of “woo-woo”s. ‘Secret Door’ fades in from very little, swelling to a sad bank of foggy keys that part to reveal an old time radio ballad, “ah-aa” harmonies swelling as Turner croons about “fooooooooooooooooooooooooooools on parade”. ‘Fire And The Thud’ meanders around for a while before some Stooges guitars and a raft of extra vocalists (notably Homme and Alison Mosshart) bring it to weighty critical mass.

Elsewhere the modest ‘Cornerstone’ makes a belated showing for melodic indie pop (if they release it as a single they’re a bunch of wusses), while the gloomily deranged ‘Pretty Visitors’ vies with ‘My Propeller’ for best song. Starting off with a choppy riff and Turner yabbering something or other about “the chicken and the dickhead”, it swiftly ditches all sense of sane structure, arriving at the deliciously hellish group intonation of “all the pretty visitors came along and cast the shadow of a snakepit on the wall” before evaporating in an oblique haze of keys.

So there you go. Humbug is a pretty good album that’s pleasingly incongruous amongst the pre-fab boredom of much modern Brit indie. It’s eminently not astounding but it is inventive, and likeably so. Re-insert into the context of once-megaselling band Arctic Monkeys’ career, worry about notions of perversity, bravery, what this all means and how this will affect their futures and it’s a bit of a headfuck. Isolate and you have an entertaining record; let's maybe just content ourselves with that.

Disclaimer: yeah yeah, we know, Sean gave Humbug a mark when he did his first listen piece. This is technically the 'proper' review, but they're both valid marks, why not just choose your favourite, hey?