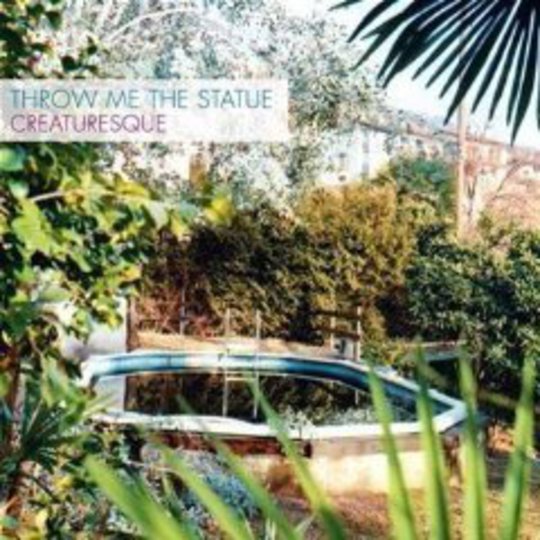 Seattle’s Throw Me The Statue remind me of a friend of mine, this attractive, clever, funny girl who for whatever reason gets overwhelmed and freaked out by the idea of going to a houseparty. They’re a fun band with clever lyrics and some infectious beats, but something like a crippling shyness seems to overcome them and hinders their ability to really make a lasting impression. Scott Rietherman’s lyrics are often sharp, but his vocals are so understated, so anxious not to offend, that they slip by unnoticed. If Jakob Dylan hadn’t got there first, they could have been The Wallflowers.

Creaturesque starts so well. ‘Waving At The Shore’ begins with a minute or two of mellow niceties as we settle in, and then suddenly there are horns and handclaps and dancing and that giddy, summery sensation of being the life of the party.

It doesn’t last, but initially that’s not a bad thing. This is the point in the night where we slink outside to where there’s more air, and ‘Pistols’ is all space. The drone of the organ creates a gorgeous soundscape of open road as Rietherman recounts tales of the long drive from his home in California. There’s a pretty girl beside him and while we may no longer be partying, there is a distinct aura of seduction in the air. “Annie, does your boyfriend know?” he breathes, “you seek a habit and a small feeling of danger.”

Now that we’ve been away from the noise for a bit, however, it’s difficult to go back. ‘Tag’ is all anxious chords; picking out the vocals is like having a conversation across a crowded room. ‘Pistols’ showed how well Throw Me The Statue can evoke The Shins, and Phil Ek must have seemed like a natural person to recruit to produce this, but his work sounds crowded here.

Which is a real shame when lyrics as remarkable as those on ‘Ancestors’ get lost. Rietherman himself is now at a party, only for his friend to receive the news of the death of his father. The impossibility of true empathy, but the acknowledgement of the inevitability of your own loss and indeed mortality are beautifully observed as he sings “to make the trip back home, to think to smell dad’s clothes, go through his rock and roll. Oh world, it’s you who turns us old.” The riffs could be Interpol but the vocal delivery is so detached the song could be about washing socks, so uncomfortable Rietherman seems with wearing his emotions openly.

‘Noises’ is supposed to be a knowing love song, but its so neat that it borders on trite, and even the introduction of a more electronic beat on ‘Snowshoes’ fails to excite. If our party has hit the doldrums, ‘Dizzy From The Fall’ is our second wind. Its joyous, off-kilter bounce recalls ‘Moonbeams’ more than anything else on this album. ‘Cannibal Rays’ is carried along on that same breeze, while ‘Hi-Fi Goon’ could be Graham Coxon hanging with Weezer.

After that energetic spurt, the party is winding down. The underpowered ‘Baby, You’re Bored’, bleeds into the sleepy ‘Shade For A Shadow’, but closer ‘The Outer Folds’ ends on a note of yearning while Reitherman urges “Every moment feels like a break for it.”

This is a polished second album, but sadly for a band who drew Neutral Milk Hotel comparisons with their debut, this is not their In the Aeroplane Over the Sea. It’s a little too smooth in places, and also a little lacking in assurance, but just like my friend, it’s worth making the effort to get into this party.