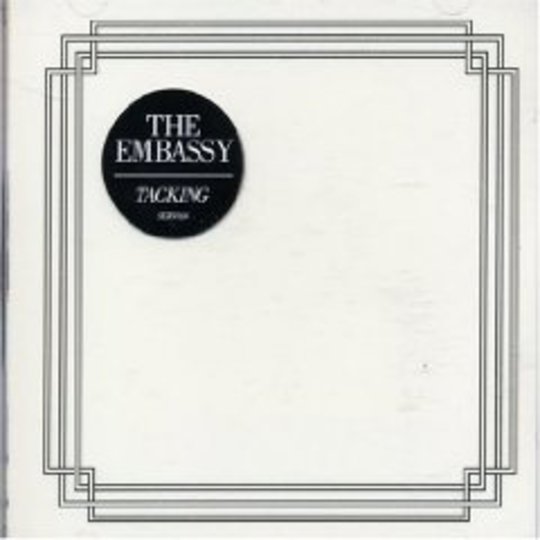 Hot on the heels of the UK release of The Tough Alliance's 2005 album The New School comes another belated UK release from Swedish label Service, this time in the form of The Embassy's 2006 album Tacking. Highly regarded in their homeland, in 2005 their debut album Futile Crimes was voted the third best Swedish album of the 21st century, and their labelmates The Tough Alliance and Studio have named their own labels after Embassy songs ('Sincerely Yours' and 'Information', respectively).

The outsider's impression of the Gothenburg music scene is of a cohesive and close-knit mesh of shared sounds and influences. Certainly The Embassy drink from the same Balearic pop well as The Tough Alliance and other artists from the wider Gothenburg scene such as Air France. In fact Tacking makes an ideal companion to The New School; like TTA they are a duo and also mirror their division of labour - Frederik Lindson is responsible for vocals and guitar whilst Torbjorn Hakansson runs the rule over synths and programming. They also both plunder the Eighties for much of their inspiration, particularly, in The Embassy's case, the jangle-pop/house crossover of Technique-era New Order and The Cure circa-Head On The Door. 'Information' is what 'Inbetween Days' would sound like if Robert Smith had had a sensible haircut, a healthy tan and a lot less emotional baggage.

What The Embassy don't share with TTA is their confrontational and boisterous attitude. They're (bitter)sweet in style, sound and sentiment. If TTA are the flashing neon in the nightclub then The Embassy are the amber hues of creeping summer sunlight you bask in on the bleary-eyed walk home.

That's not to say that Tacking is in any way a comedown album. 'Lurking (With a Distance)' is especially nocturnal with its warbly house bassline and taut white-funk guitars, whilst album closer 'Was That All It Was' is dripping in staccato disco strings and sleazy saxophone. However, the prevalent setting is relaxed-but-danceable pop. Hakansson's synths are rarely the starting point for Tacking's dancier aspects: instead the persistent beats, busy tropical percussion and brisk strumming patterns of Lindson's acoustic guitars dictate tempo. Synths are mainly employed for ethereal backing sounds, whilst other electronic and organic instrumentation provide melodic and rhythmic embellishment. The resulting sound is lush, but textured, and so evocative of summer that warmth positively radiates from your speakers.

Opener 'Some Indulgence' might just be the best example of Tacking's sound and mood holding together in one song: it starts with a tinny hi-hat and drum machine snare beat briefly accompanied only by some sensual sampled "uhs", before a twangy bass guitar, brusque snare hit and rapidly strummed acoustic guitar bring some clatter and drive. A melancholic synth orchestra swells to accompany Lindon's plaintive chorus of "I gave you my life, my ambition, my hope and some love of course". The overall effect is melancholic, yet strangely erotic due to the repetition of the breathy "uhs" throughout. Non-verbal vocals also evoke summertime perfectly at the start of the lovely 'Stage Persona', with a refreshing "aaaaahh", which sounds like the aftermath of some desperately needed liquid refreshment. 'Stage Persona' and the following 'It Pays To Belong' lean towards breezy indie-pop, being predominantly acoustic guitar supplemented by synthetic tropical percussion in both cases, and nuanced xylophone and synth string countermelodies in the latter case.

The fact that Tacking is such an ideal summer soundtrack may be its biggest drawback. In fact, it almost feels like the album should cease to exist when autumn begins to draw in. It's also extremely brief, barely scraping past the half hour mark, but then there is that saying about how good things never last although their memory lingers on. Thankfully, Tacking is such a delightful listen you'll be happy for it to linger into even the darkest recesses of winter.