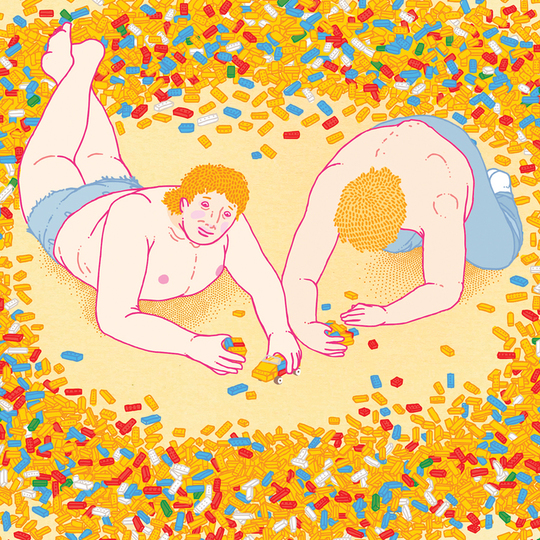 I’ve never seen an episode of The Wire, the general logic being that I’d either hate it and feel like I’ve somehow failed as a human being, or else like it and become one of those horrible bores who yak on about it in that peculiar way that seems only to be shared with readers of car magazines.

But I get the general impression: Baltimore is kind of grim. No Dixon Of Dock Green is gonna clean that town up. No sir. But bucketloads of grit is not, it has to be said, the way its latest crop of musicans have chosen to deal with their surrounds. Not unless the grit is glow in the dark and makes squeaking noises. Ponytail; Adventure; Dan Deacon; Future Islands; and not to except alumni Animal Collective; Baltimore indie bands seem to respond to their murky surrounds with cartoonish, almost childish joy. Call it escapism or call it coincidence, but events seems to have reached a logically illogical head with the advent of EAR PWR, a duo so utterly ridiculous that it’s genuinely hard to imagine where you could possibly push things beyond here.

Indeed, the very appeal of a song like ‘Discover Your Colours’ probably stems from an at least partial dislike of (or at least refusal to be serious about) the genres that it cribs off. Basically singer Sarah PWR cheerily jabbers lines like ”manatee, manatee, think about the one you love, gravity, gravity, g-g-g-g-get together” in her fey chirrup, while underneath murky electronics churn and roil. Whether you think it’s a neat piece of counterbalance wherein each strand curbs the excess of the other and ignites into giddy, thrilling fusion or you just think each ruins the other is going to be an entirely subjective matter.

This is one song of 16, we’re talking about, and though it sets the tone as much as anything, it would be, er, simplifying things to call Super Animal Brothers III tweestep all the way. If there is a formula it’s this: PWR chirrups something ridiculous, often about manatees (yes, they do have more than one song about manatees), often a baffling slogan (“Ten thousand fathoms! Nine thousand fathoms!” she chirrups on ‘Beam Of Light’) often a total inanity (see pretty much all of ‘Sparkly Sweater’). At the same time she and bandmate Devin Booze (hmm) whip up some sort of electronic backing that’s generally dark enough to provide balance, but not developed or imposing enough to actively place this as an electronic record: the ominous, Soviet horn loop of ‘Epic Suitcase’, the glitchy distortion of 'Boys II Volcanoes', the tamed chipcore of 'Sparkly Sweater'.

Is it knowing? Probably. I mean, there's a song on there called ‘Cats Is People, Too’. But the appeal isn't ironic: Super Animal Brothers III is a fanciful and entirely genuine experiment in spinning leftfield electronic influences and sinister ambience into sunny, escapist silliness, kind of like remaking a taut psychological horror into a surrealist comedy. And in that respect it’s largely successful. Whether you would like it to succeed is a matter of personal preference, but it’s certainly not novelty music: for all PWR’s cuteness, she maintains opacity, her lyrics simply too baffling to come across as saccharine, while the two are talented enough musicians to create plausibly noir-ish terrain for PWR to throw into relief with her DayGlo lambency.

If Super Animal Brothers III has a failing on its own terms, it’s that once you’ve acclimatised to the sheer daft exuberance of it all, you may long for a little more substance. Though the songs are both numerous and short, they’re mostly a solitary musical idea that tends not to be explored too far, well done as it might be. But the makers of The Wire should be grateful they called it a day before the Super Animal Bros showed on the scene: the streets of Baltimore just got a little less ominous.