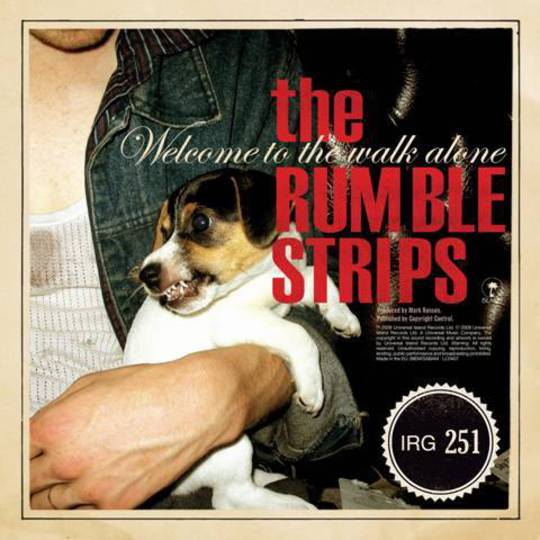 On early singles and subsequent debut album Girls And Weather, there was a Dexy’s Midnight Runners-shaped hole that The Rumble Strips would be popped into for ease of categorisation. Nice snug fit it was too. But then, how could you not think of Kevin Rowland's feverish new soul vision when there were Charlie Waller’s aching and elastic vocals sat atop a horn section that propelled and shook every track?

Yet a deeper look would reveal, as it always tends to, that any similarities were really just skin deep. In Rip It Up And Start Again Simon Reynolds describes Dexy’s as an outfit whose militaristic routines and high sense of collectivised purpose could only ever result in absolute devotion or derision.

The Rumble Strips however seemed to be the complete antithesis of this straight-faced front. There was still passion but also wit and warmth and no trace of Dexy’s ‘emotional fascism’, instead just sounding like a group of battered and bruised romantics that have gotta keep dancing to keep from cryin'.

However, the one major similarity comes from Reynolds throwaway description of the Dexy’s sound as ‘pugilistic’. This goes a little way to describing the music of Rowland and the gang, but absolutely nails Girls And Weather. Listening again with this description in mind, you notice the intermittent jabs of drum and brass and nervy scratch of the guitar, the way most songs will drift and hold back, taking their time before erupting in full flow. However, on follow-up Welcome To The Walk Alone, there is little explicit trace of this bare-knuckled debut sound.

It isn’t a change that would hit too much by listening to recent releases 'London' or 'Not The Only Person'. Hear them with the crackle of the radio and you wouldn’t think that too much has transformed at all, but the album's opening title track tells you everything about how their sound has developed. It begins with a slow and steady, sober pound of brass and piano. This falls away to Waller’s restrained vocals set to a steady beat and tambourine echo that soon gets caught by sweeping, shivering strings and groaning brass. It’s far less dramatic and frenetic but with definite echoes of 'The Seventh Seal', opener to Scott Walker's Scott 4.

So if the focus of Girls And Weather was punching Sixties soul and swinging rock'n'roll, then Welcome To The Walk Alone mostly moves its focus towards a broader Sixties pop sound. The album is scattered with more luscious Walker strings, bobbing Beatles brass and woozy Bowie piano lines. When the guitars and drums gallop and the strings soar, it’s an attempt at a more dramatic, and in some instances almost cinematic, sound. ‘Daniel’ again goes for more ‘Seventh Seal’-style epicness, while there’s an elegantly icy Bond feel about album closer ‘Happy Hell’, and ‘Back Bone’ arrives with a flurry of fluttering Hitchcockian menace. But these sumptuous orchestral strokes don’t completely dominate the album. The aforementioned releases rattle by with the dynamic ardour of the first record, as does the frantic ‘Running On Empty’, with ‘Sweetheart Hooligan’ a simple and delicate gin-soaked lullaby that slows things to a canter. ‘Douglas’, a lilting summer waltz that comes halfway through the record, is probably the perfect example of the newly-developed sound and one of the album's highlights alongside the title track.

The lyrics, on the whole, seem to contribute less of the happy-go-lucky atmosphere that scattered the first album. There’s no-one getting satisfaction from a boozy afternoon spent looking at the clouds, but instead the album is bookended by allusions to the hell that awaits us and the slow walk it will take to get there. Whereas the protagonist of the first album daydreamed about his bicycle transforming into a motorbike so he could escape, this time on ‘Running On Empty’, the bike is here but its lack of fuel leaves him sodden and stranded at the side of the road, crying out at those idly passing by.

It doesn’t necessarily feel like a strict attempt to reach for seriousness, but the difference is evident nonetheless. With the appropriation of this new pop sound but the preservation of the band's natural punch, the tension is always between the grand and the epic and the scrappy and spirited, but, with Waller's vocals as the glue that binds it all, on the whole it’s a pretty seamless marriage. Though you can draw a comfortable comparison to The Last Shadow Puppets (Owen Pallot having arranged the orchestras on both records), WTTWA isn’t a complete absorption of galloping, glistening orchestral drama and slick ballads, and that’s the key to the album's success. For the first record they always sounded like they were tearing up a seedy backroom, needing to play as loud and as fast as possible to be heard over the smash of glass and the indomitable buzz of the boozed up clientele. Here that same innate passion is retained, but supplemented by the new musical tricks.

It wouldn’t be surprising if Mark Ronson's involvement as producer proves to be a divisive factor in people’s reaction to this record, perhaps complaining that it’s just more crass pop-up sounds hacked from musical history with his magpie ears. But that would be unfair. A glossy Sixties pop sheen hasn’t just been splattered wholesale over every track but instead nicely integrated resulting in a new and engaging, but hardly incongruous, Rumble Strips noise.