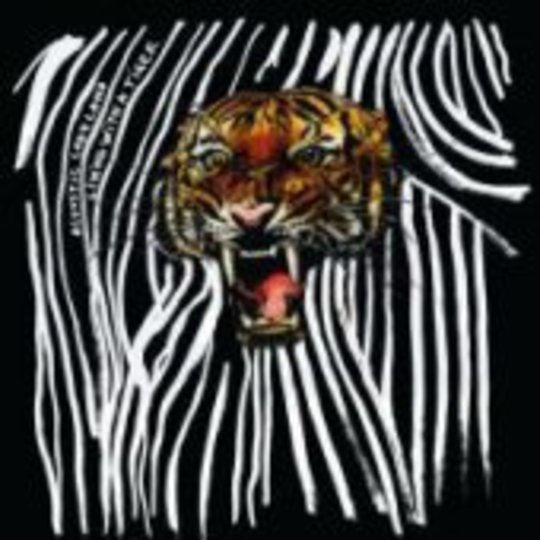 Seb Rochford’s afro seems to defy the laws of physics. If you’ve ever listened to the drumming on any of his numerous projects, the image that springs to mind is of Animal (of Muppets fame) – all blood and sweat, flailing hands and hair. I’ve never seen him perform with Acoustic Ladyland, but certainly when playing with Polar Bear the reality couldn’t be more different. Live he exudes a Zen-like calm: even as his arms fly across the kit and produce patterns impossible to decipher, his head remains motionless aside from the odd nod, mass of hair buoyant in the air above, like still pedals on a freewheeling bicycle. It seems inconceivable that anything could rattle this aura – indeed, I suspect, even after listening to Living With A Tiger, that he probably looks as unshakeable hammering chaotic punk fills as teasing out subtle jazz licks.

Acoustic Ladyland’s latest is the next step in a series of records that has taken them progressively further from their roots as a jazz band, insofar as the J-word can be used to describe what they do. From the squalling fuzz of their breakthrough, 2005’s Last Chance Disco, through third long-player Skinny Grin’s fusion of foreboding atmospherics and guest vocals, there has always been a certain willingness to mix things up and incorporate ideas from diverse areas and genres. In particular, the common thread throughout all of Rochford’s projects has been a devotion to the freedom of punk rock, an element brought further to the fore on Living With A Tiger with a reshuffling of members and recruitment of a full-time guitarist. Initially this seems suggestive that the band have adopted a simpler, back-to-basics aesthetic: opener ‘Sport Mode’ is not a million miles from Funhouse-era Stooges, Pete Wareham’s saxophone leaping octaves over a frenzied garage-rock workout, and the devotional ‘Glasto’ toys with Sonic Youth-ish dissonance before a low-slung bassline propels it to full throttle.

Nonetheless, for all the visceral thrill of the early part of the record, the real excitement and innovation is to be found in its middle and later sections which feel less like simplification, more like calculated stripping down; lean, mean and aimed straight for the jugular. The title track comes across as a summation of their early work pared to its core elements – squealing sax peaks ride roughly over a slow churn before the disjointed midsection gradually builds speed over increasingly frenetic jazz drums. A stop-start finish lurches seamlessly into album highlight ‘Gratitude’, Wareham’s swung bar-room sax and hip-thrusting rhythms evoking both menace and an aggressive sexuality that tears the song’s fabric entirely apart halfway through but draws it back together by the climax. It’s a startling moment, indicative of how intuitive this group are capable of sounding, and one of the finest pieces of music I’ve heard all year.

Paradoxically, despite – or perhaps even due to – its directness, Living With A Tiger is a challenging record, only revealing its full depth on repeated visits. After several listens the slow-burning melodic pieces towards the end start to make more sense, acting both as the calm after the early storm and as a gradual build to closer ‘You & I’. Closer inspections reveal the crucial role played by Rochford’s drumming; throughout the course of the album’s length disparate strands of instrumentation constantly threaten to rip away from one another and head off in wildly divergent directions, yet the presence of drummer as bandleader is palpable – he skilfully reins in the other players and provides a skeletal structure at once metronomically accurate and wildly anarchic. The mere presence of a saxophone does not make a jazz band; ultimately it is this harnessing of order from chaos and rhythmic diversity that anchors Acoustic Ladyland to their musical heritage, even as their own music moves incrementally further from traditional touchstones.