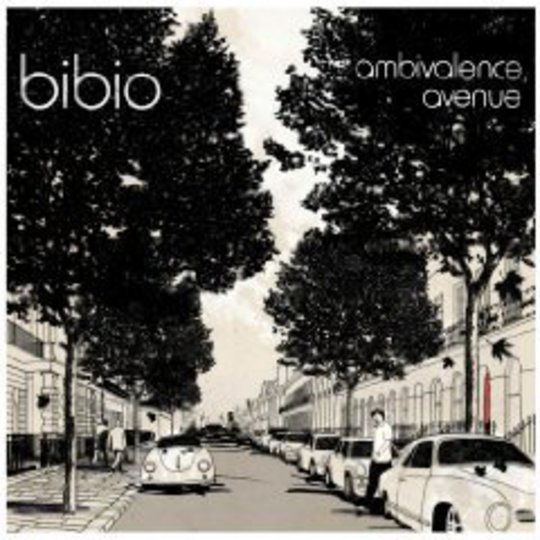 You guys are OK with me judging a book by its cover, right? Sweet: let’s ponder the truly puzzling artwork that adorns the fifth Bibio album. Ambivalence Avenue’s artwork is so calculatedly bland as to be borderline offensive: a monochrome sketch of a city street, trees grasping at the sky, Victorian terraced housing, a recent-model Beetle parked on one side, a recent-model Mini on the other. Hell, I’d totally live there if I got a job with a non-depressing salary; I sure as shit wouldn’t make a record trumpeting the fact, though. Is this the Ambivalence Avenue of the title? Why are you goading me into highlighting your mediocre pleasantness? If I write ASPIRATIONAL LIVING and COFFEE TABLE and DINNER PARTY and ISLINGTON in this review it makes us both look bad. Which, Stephen James Wilkinson (if I can call you by your real name), would be dissatisfying.

Still, the only rationale this particular brain can conjure up to explain the sleeve is that Bibio is implicitly sizing up the background and upbringing which shaped his music with that of Detroit’s techno progenitors. Concrete-clad industrial austerity and cobbled-together electronics begets cold, clinical efficiency underpinned by soul and sensitivity. On the other hand, a neither-here-nor-there Midlands childhood punctuated by holidays fishing in Wales (this is where the name Bibio, a fly commonly used by fly-fishermen, originates), plus similarly cobbled-together electronics, results in an aesthetic of hazy nostalgia and, perhaps, a desire to pinpoint beauty in one’s surroundings, rather than escape them altogether. If this comparison holds water, then as electronic records from the waistband of England go, Ambivalence Avenue is more ‘real’ than anything Surgeon has ever made. It also highlights why realness and authenticity are almost entirely useless concepts in relation to music, especially that which is fed into a computer and mangled before being unleashed on the world.

The caveat as regards Bibio, however, is his sizeable folk influence: pretty much every track (of 12) on Ambivalence Avenue places chiming, piecemeal acoustic guitar at the forefront. Wilkinson has spoken before of his jones for the Incredible String Band – which came about via a recommendation from Boards Of Canada, who passed his early demos to previous label Mush and who are arguably his biggest influence – but there’s almost none of the spontaneity, surrealism and collectivized creepiness that marked out the ISB as something truly unique.

Bibio’s tendency, across the album, to either smooth the edges of his creations into non-threatening abstraction or fail to zone in on his best ideas is frustrating. ‘All The Flowers’ trundles along on a cute, tickly loop of folk guitar which wouldn’t be out of place on a Four Tet album like Pause. For sixty seconds. Then it finishes, and a sample of some young children playing kicks in, by way of introducing ‘Fire Ant’, which is sort of like Prefuse 73 if it was 2001 and he’d made a large bet with someone that he could get included on an Ibiza chillout compilation. It does serve to highlight the highlights by context: the moderately paunchy low end of ‘Sugarette’ feels like the brown note for a second, the vocal gloop of the backmasking on ‘S’vive’, and the chattering funk of its attendant bassline, comes off as almost… industrial. The album’s last hurrah, ‘Dwrcan’, throws about some drill breaks and droney synths to flag up the admittedly-expected presence of Nineties Aphex in Wilkinson’s record racks.

One’s duty to pour one out for Steven Wells notwithstanding, this is only really a despicable record from the point of view of a blinkered-by-design punk ideologue. And yet a slightly more rounded perspective still leaves you wondering how anyone is supposed to have an emotional reaction to Ambivalence Avenue deeper than a mild admiration. To that end I’m reminded of the new Grizzly Bear album, which does, in a roundabout way, rather invite one to wring hands about Warp Records in the '09. Time was they were the reliable go-to source for people who didn’t want to settle for Lemon Jelly and Groove Armada. And now… well, you see the conclusion being drawn here, I trust.