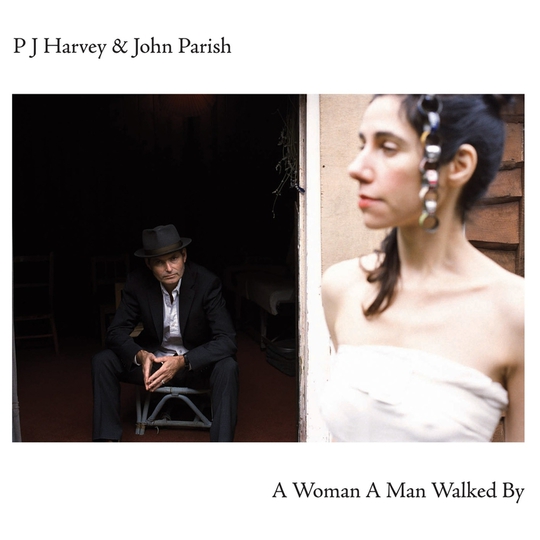 The most disturbing bit in PJ Harvey’s live DVD Please Leave Quietly comes not from the weapons grade quantities of excoriating devil-blues contained therein, but a scene near the end of the tour where the bleakest woman in rock gets well and truly tequila'd, mumbling incoherently to camera with a big, sleepy grin on her face.

Okay, it’s a bit unrealistic to expect Polly Jean Harvey (the person) to spend her free time pining at the stars in a Dorset garret, but still, seeing her goof around was... weird. PJ Harvey (the indie star) does not goof around or do fun. PJ Harvey can be exhilarating, thrilling, or offer up a disturbingly hysterical variant on black humour, but she ain't fun.

A Woman A Man Walked By is kinda, sorta fun. It’s also not a PJ Harvey album, but a PJ Harvey and John Parish album, their second after 1996’s Dance Hall At Louse Point. That was in fact credited to Polly Jean rather than PJ, which may seem a pedantic point, but Dance Hall... didn’t really sound like a PJ Harvey record. With long-term collaborator Parish taking first billing, it was a chilly patchwork of his dolorously minimal blues overlaid with jarring shards of vocal, Harvey’s lyrics and delivery more akin to performance poetry than regular singing. It was definitely not fun.

Its follow-up does sound like a PJ Harvey record, to such an extent you’d be unlikely to immediately guess the music wasn’t primarily hers. The difference is attitudinal. Her last record, 2007’s White Chalk, came bound in the mother of all stylistic straitjackets, guitar traded for piano, demon-hearted growl exchanged for a high, girlish quaver. This goes the opposite direction, an eruption of styles that begins with the rasp and glisten of single ‘Black Hearted Love’ – a Stories From The City...-throwback given bite by the strangling chain of feedback throttling the chorus – ends with ‘Cracks In The Canvas’ – a dislocated spoken word rumination on the numbness of bereavement – and in between finds time for diversions into American Gothic (‘Leaving California’), nerve-shredding howls of primal rage (‘Pig Will Not’) and what sounds suspiciously like a Nick Cave pastiche (‘A Woman A Man Walked By / The Crow Knows Where All The Little Children Go’).

Which may not sound like the biggest hoot ever committed to record, but it’s hard to express what a joy it is to hear PJ Harvey completely unshackled, free of overriding concepts, conceits or shadows in her mind, responding to the broad canvas Parish has presented to her by blasting away with whatever she fancies. And often it is in fact pretty funny, notably the title track, on which the singer squawks like an alarmed seagull about a man who ”had chicken-liver balls” before snarlingly reaching the conclusion ”I want his FUCKING aaaaaaaaaaaaassss!” in a manner that suggests ‘he’ should probably have started running about a week ago.

You could maybe cobble together a theory that the song actually is about ex-lover Cave, should you so choose. But in fact another reason why this record is so enjoyable is while you normally get the feeling Harvey is coming from someplace horribly, uncomfortably bleak and personal, here she’s essentially just letting rip with a bunch of made up character studies. That’s not to say this record lacks gravitas. Her croaked old lady voice on ‘April’ takes a bit of getting used to, but hits pathos-drenched stride as she wheezes the line ”these days just seem to crush me” around a slow, skeletal organ waltz. And the bucolic, woodwind-flighted crawl of ‘Passionless, Pointless’ finds as poignant a pay off as she’s ever written: ”you slept facing the wall, and you wanted less than I wanted”. But the feeling is of exquisite melancholy arising from masterful songcraft, not suffocating darkness; for that simply contrast with her last character-based album, 1998’s chokehold brutal Is This Desire?.

I’ve not mentioned John Parish too much here, which is entirely to his credit. The shrill pastoral chaos of the title track’s last two minutes aside, there are no instrumental sections on the record, no big riffs, nothing particularly in yer face at all, musically. He’s crafted a backdrop for his co-writer – a spine-tingling one, built of plucking, picking and chimes, kissed by old organs and occasionally scalded by ugly knots of scabrous electric guitar – but a backdrop nonetheless. And in front of it she’s performed magnificently. You can argue that A Woman A Man Walked By is inconsistent in tone and smacks of dilettantism, that it’s her most frivolous album to date, that talented as Harvey and Parish are, this is basically the sound of two mates mucking around. Which is all on some level true, but let’s be clear: it has been an age – perhaps never – since PJ Harvey has made a record that’s such a fucking blast.