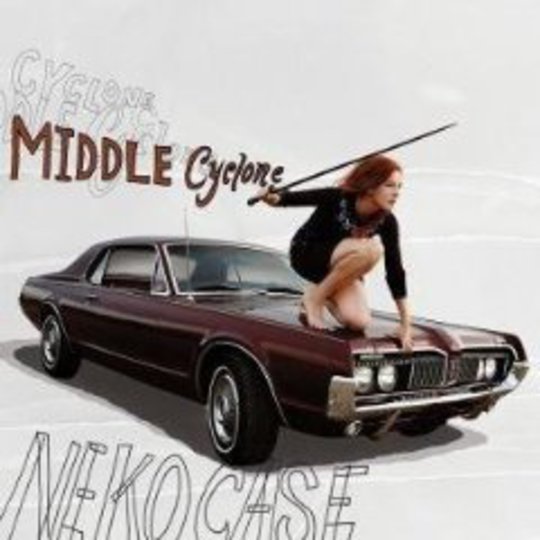 One of the many, many things that used to separate Neko Case from the country community at large was how honest to god terrifying she could be. “I shot a man in Reno just to watch him die”? Oh did you now Johnny? Big deal. You could shoot all the men in Reno (not a terrible idea, actually, it’s awful) and still get the shivers from Case’s searingly lonely murder victim study ‘Deep Red Bells’, the Lynchian horror of ‘Ghost Wiring’, the apocalyptic prophecy of ‘Fox Confessor Brings The Flood’.

This gift of darkness hasn’t exactly deserted her on fifth album Middle Cyclone: discounting the half hour of frog noises that constitutes ‘Marais La Nuit’ (and you’d be wise to), the record ends with ‘Red Tide’, as chokingly potent a song as she’s ever written. In it, Case’s protagonist wanders in a dazed reverie triggered by the smells of the shore, mundane seaside details thrown into sinister relief as a storm of growling brass and driving piano gathers and gathers until erupting about the cryptic bleakness of her final declaration “I want to go back and die at the drive-in / Die before strangers can say / I hate the rain”.

It’s a late in the game reminder of why people have oft-settled on the term ‘country noir’ to describe her singular canon. However, that’s not really a tag you can apply to an album that’s easy to enjoy but hard to be overly-affected by. In fact Middle Cyclone suffers from a similar malaise to bandmates The New Pornographers’ Challengers, in that it’s a nice, well-constructed record that contains much of what made previous records so stunning, but ends up just a little on the dull side.

Still, there’s much to like and it begins on an immediate high with ‘This Tornado Loves You’. A dusty pop-country strum, it's possessed of possibly her most violent lyric to date – “grounded in with bloody hides, their broken legs will lie in the ditch”, she chirrups – yet it's crafted as a song of yearning, Case assuming the role of the tornado, its terrible, insatiable energies an expression of desire, not hatred; ”my love, I am the speed of sound”. Take it literally or as allegory for her own passions, it's a beautiful image.

Her reputed heartbreaker status is most certainly the subject of single ‘People Got A Lot Of Nerve’, in which she assumes the perspective of various murderous zoo animals, the game rather given away with the tongue-in-cheek hook “I’m a man eater, but you’re still surprised when I eat ya”. Not her most solemnly poetic moment, but she's always had a wry sense of humour, plus gravitas aplenty is offered by her world-weary delivery and the sad, tangled weaves of crystalline guitar.

In fact after the mutated Hungarian folklore of 2006’s Fox Confessor Brings The Flood, Middle Cyclone is a much more naval-gazing affair, Case dwelling again and again on her propensity for romantic destruction. This is no problem lyrically, because her way with words hasn’t dulled a bit – “my love has never lived indoors, I had to drag it home by force” she sighs on ‘Vengeance Is Sleeping’.

But the corresponding musical introversion doesn’t suit so well. With a typically stellar supporting cast (M Ward, Howe Gelb, Garth Hudson... the lady clearly has contacts), and an eight-piece ‘piano orchestra’ forming much of the musical palette, the songs are nonethless frequently nothing more exciting than a mid-paced strum picked out with a few dreamy, intricate little details: the death march drums on ‘Polar Nettles’, the detuned clockwork on ‘Middle Cyclone’. All very nice but very rarely does it surprise, seduce or scare. When it does – ‘Red Tide’, the slowbuild percussive stomp of ‘I’m An Animal’, the five and a half minute fever dream of ‘Prison Girls’ - Middle Cyclone is very good, but really, after Fox Confessor... and Blacklisted it’s only what we’ve come to expect.

It’s tempting to conflate the fact Middle Cyclone is less outré than her last couple of sets with the fact it last week cracked the US top three, but there’s nothing particularly sell out-ish about it, and certainly with her lyrical gifts and that incredible voice still firmly intact, it’s hard to even really be that disappointed. As she assert time and time again, Neko Case is a force of nature, erratic, unpredictable, frustrating and powerful. She’ll be back, and twice as dangerous.