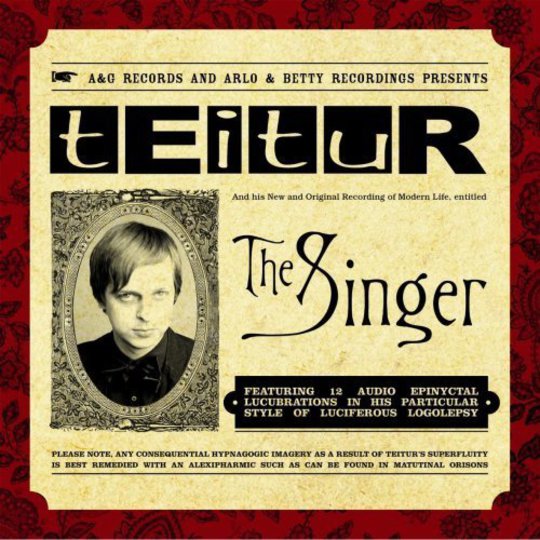 The Faroe Islands is certainly not known for its music (Eivor and Boys In A Band excepted), but then again neither are The Shetlands. Small remote groups of islands don't appear to be conducive to the creation of "scenes". Perhaps it's no surprise, then, that Teitur left his isolated homeland for Denmark aged 17.

Though he is an artist who has had critical acclaim elsewhere in the world – 'One And Only' appeared on the soundtrack to My Super Ex-Girlfriend, surprisingly – he is an unknown quantity to British audiences. An industry gig at the Danish Ambassador's residence is one such way to overcome this, or equally effective would be to produce a top draw UK debut. And he has.

Teitur's is a voice which portrays an innocence, but perhaps one which isn't really genuine. The lyrics on The Singer are not the words of a modest man, but their simplicity and clarity make sure every word is understood and swallowed simply. “I always had the voice, now I am a singer / They wonder what I'm doing up there on the stage / They stare at my posture and say I speak so well” demonstrates this odd set of lyrics. They almost feel out of place, and baffle just as to whether they are sung seriously. Given everything which follows, it's a fair bet to say that we also have an artist who manages to see the amusing side of inherently unfunny things.

The Faroese language is one which suits the dreamy and languid style of Teitur to a tee – almost to the extent that it's a shame that everything on The Singer is in English. That's not to say he sings in a heavily accented style, far from it; indeed many of the characteristics of the Faroese language carry well into Teitur's anglophonic melodies but the shroud of mystery is one which a lot of artists benefit greatly from.

That said, The Singer shows that Teitur is not somebody who needs to mask a lack of quality with mystery. The Nordic issue is relevant too; throwing bands from a country or region in together is often a throwaway and thoughtless action, but Teitur's tones and textures are certainly similar to contemporaries like Ane Brun and Lykke Li. It is a type of music which reflects the nature of the geography of their surroundings; an openness and definition in sound which is entirely appropriate. I guess you could just call it reverb, though.

Traditional song patterns and structures are mostly avoided here, shunning convention for creativity and experimentation. Horns are used to great effect throughout, likewise the percussive instruments which manage to both brighten and darken the mood when required. Though 'Catherine The Waitress' is an upbeat and hopelessly hopeful love song, there are moments of almost overbearing darkness, too.

The emphasis on the ultra low, saddening strings on 'Guilty By Association' backs bleak lyrics such as “The killer is a cold blooded one, and he shoots cats just for fun” with a crushing, funereal atmosphere. It is an incremental increase in the gloom and blueness throughout the album as the earlier fleeting moments of sanguinity are long gone and forgotten once the heart of the record is entered. A creeping black shadow emerges seven songs in and leaves not until the final lingering melody has ceased to be. 'The Legendary Afterparty' chronicles a meeting with fallen (or more accurately falling) bluesman Chris Whitley, and certainly fits with the tone of the latter half despite its mildly joyous chorus.

An unknown quantity and a general unknown Teitur may have been before the release of The Singer, but there's not a second on here that suggests this should continue to be the case. It is by no means a flawless album – if anything, its lesser moments are a tad plain – but the criticisms are few and fairly insignificant, and are so emphatically outweighed by everything else.