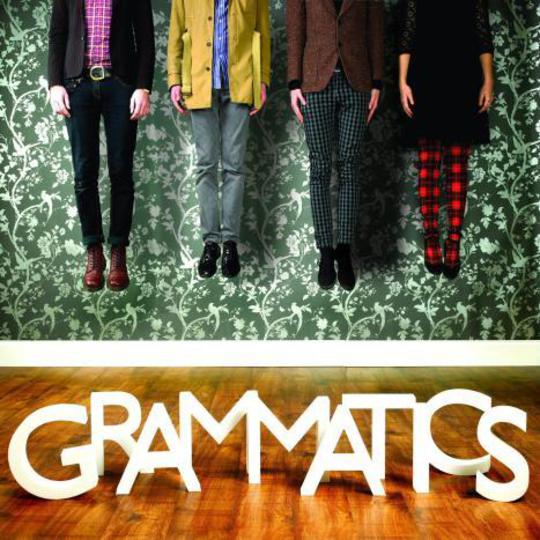 Take a deep breath, turn the lights out and put some headphones on. This could take a while.

It's rare that a new band comes along who divide opinion - critical and otherwise - quite so much as Leeds' Grammatics seem to have done thus far in their short musical career. They're a Marmite band, plain and simple. Chances are, you'll either love their sound, or hate it, because indifference isn't really an option when confronted with something as extraordinary (twin meanings: 1. So far removed from the norm, and 2. Utterly brilliant) as this. And if you're left nonplussed, listen again. Sooner or later it'll take hold, one way or another.

But let's rewind for a second. It's five months into 2007, you're a music writer. You get handed a demo CD, about which you instantly forget. As usual. Somehow, it survives the long, painful train journey home and, the next day, makes its way on to your stereo. What you hear is, basically, a confusingly artful mess - so many ideas, so many instruments, all vying for a space that never quite seems big enough. It sounds angry, at times to the detriment of the melodies. It also sounds a lot like Cursive's hyper-literate paranoia-pop. Crucially, though, it still reeks of promise.

Now it's March 2009, and that same quartet (well, with the addition of Emilia Ergin who replaced original cellist Rebecca Dumican last year) have delivered an album that not only fulfils their early potential, it surpasses it by some distance. With swooping string arrangements and dense layers of fizzing electronics supplementing guitar, cello, drums and bass in songs that rarely follow conventional verse-chorus-verse structure, it's also as complex, cerebral a debut LP as you'll hear all year.

The signs were always there, of course. Early single 'D.I.L.E.M.M.A.' - second up here - was a complex, polyrhythmic dance-beast that never quite reached the dancefloors, possibly because Foals got there first, and possibly because it was trying to be a bit too clever. That's a common criticism of the band, and one their debut elegantly sidesteps. Still, it's not like they've ever ventured anywhere near Mars Volta jazz-wank territory; no, this is a band who've always had choruses to spare, it's just that they've often chosen to bury them a little deeper than many listeners might expect. For fans of ambitious music, this record shouldn't be a problem. And if it is, well, you've got the likes of 'Murderer', 'Broken Wing' and 'Inkjet Lakes' (featuring the vocal talents of Laura Groves, aka Blue Roses) here to offer a more immediate fix. And it's the contrast between those two opposing enthusiasms, that accessible, immediate light and complex, slow-burning shade, that makes Grammatics such a rare, rewarding listen.

Following 'Broken Wing' is album - and live - highlight 'Relentless Fours', an epic six-minutes-plus showcase of twisted electronica, jagged noise, razorblade cello and - of course - that beefy rhythm section. Reviewers might always focus on singer Owen Brinley (as reviews are wont to do), but there's no question that Dominic Ord and Rory O'Hara's input, on drums and bass respectively, is one of the keys to their appeal.

And, in truth, it's Brinley's voice that a lot of the naysayers take issue with. See that phrase from earlier: Marmite (See also: Conor Oberst and Matt Bellamy). It's all subjective, of course, but at no point on this album do his vocals sound overbearing or histrionic... at least to these ears. It's a band record, not a showcase for a talented singer, hence Ergin sings backing on a number of tracks, and Groves on two (she also appears on 'Relentless Fours').

Reviews shouldn't be rebuttals, though, particularly when there's so much that's good (nay, great) about the record in question. The way the tracks run into one another via samples and background noise to form a continuous, cohesive, whole, for instance. There's the way they lurch schizophrenically from one mood to another; the transition from 'Polar Swelling' to 'Rosa Flood' proving particularly brain-churning.

Everything here sounds like nothing we've heard in recent times from a new act. It's that all-too-rare example of a band combining myriad shared influences (early Blur, Radiohead, Suede... The Faint?) into something that seems to exist only in its own brilliant context, regardless of trends or cultural norms. That's the point, really: for better or worse, love 'em or hate 'em, at this moment in time, Grammatics are doing something brave and truly exceptional - not something that can be said for many of the current crop of new acts. Their debut is not only a rewarding listen, it's also a record which will to continue to reveal its brilliance over the coming months. And most excitingly of all, it's only the first full-length statement from a band whose dramatic development over the past couple of years suggests even greater things might just lie ahead.