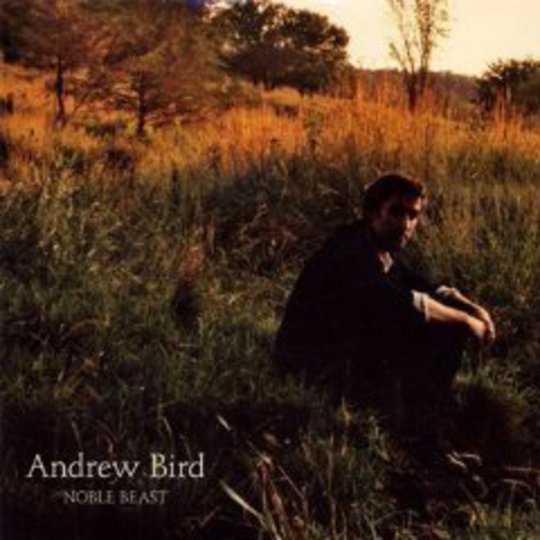 Since emerging in the mid 90s Andrew Bird has leapt from genre to genre with aplomb, thrilling fans, critics and fellow musicians alike with his wares. A prodigiously talented violinist, proficient wordsmith and fine singer, he now finds himself in a position where he’s able to blog for the New York Times, ascend to the upper echelons of the US Billboard Chart and record with affiliates such as Wilco and Lambchop. And whistle real good.

But just as he invites criticism that revels in verbose flattery without ever imparting what it is he actually sounds like, or why exactly he’s to be admired so, at times Bird himself falls prey to impressing rather than engaging his listener. For this critic, his work – texturally accomplished and well crafted as it is – has never impressed quite as it should. Not a popular viewpoint, but an honest one; the niggling suspicion that its designs lie on the head as opposed to the heart has long persisted.

But, well. You can probably see where this is going, can’t you? One of the keys involved in unlocking this music box can be found on the recent Dark Was the Night compilation, where among an extraordinary assemblage of talent Bird more than holds his own. The enduring impression of his take on The Handsome Family’s ‘Illinois’ is one of simple, unabashed warmth; resplendent in acoustic glow and gently cascading orchestration. It’s a real showstopper, and no mean feat in such illustrious company.

It’s also a fine indication of what Noble Beast offers. One of the many strengths of this record lies in its sheer transportive quality. “Let’s get out of here / Past the atmosphere” Bird croons on ‘Oh No’, a pristine opener if ever there was one – inspired by the “sweet, mournful cry” of a four-year-old sat behind him on an aeroplane. As the man himself told us back in January, the aim was to capture the emotional abandon on display which he found enviable. Conversely – and very much in keeping with the spirit of the LP – it’s positively joyous considering the dread so “utterly complete” it’s born out of, an autumnal shuffle reminiscent of The Shins at their melodically-inclined finest.

The musical landscape found within is as bizarre and enriching as it is on occasion perplexing. Nevertheless, it’s a rabbit-hole to tumble down willingly. A talent this singular transcends comparison, really, though if it’s that you’re after, dulcet tones akin to the aforementioned Portlanders permeate the record. The vision and virtuosity apparent evokes an on-song John Martyn (as does the otherworldly acoustic tapestry heralding ‘Masterswarm’), while shades of Thom Yorke and Rufus Wainwright inform his rich, quavering vocal. There aren’t many more grand comparisons to be drawn, as the myriad embellishments, strings and percussive elements Bird commands are a crafted law unto themselves, undulating and transmogrifying onto paths hitherto unforeseen.

Lyrically, however (an area he professes to find significantly more problematic than that of melody), it’s difficult to get a handle on. “Proto Sanskrit Minoans and Porto-centric Lisboans” inhabit the world of ‘Tenuousness’ – coprophagia and Uralic syntaxes getting a mention too. Over the course of the album, Bird constantly alludes to the arcane and exotic, yet somehow falls short of alienating. The epic sweep of ‘Souverian’ is testament to this, its title a nonexistent reflection of numerous words, deconstructed against chords of ringing melancholy in the song itself. Although the linguistic mischief of the record is adroit and infectious (“The enemy see a sea anemone,” anyone?), the odd straightforward couplet is appreciated, too.

Thematically rooted in concepts of evolution, escape and unity, individual highlights are difficult to pluck from this intricate 14 song cycle, though the deep splendour of Bird’s own favourite ‘Natural Disaster’ is dazzling. The Loney, Dear / Wildbirds & Peacedrums assisted ‘The Privateers’ also helps mark a back end that in no way falls short of its captivating first half (though ‘Effigy’ makes a quiet run at the record’s very finest).

Where Andrew Bird succeeds so fervently with Noble Beast is in endowing it a vital, quixotic sense of humanity. Mirroring its beginnings, ‘On Ho!’ sees it bid graceful farewell via spiralling loops of violin and clarinet. This is his synthesis of that little boy’s cry writ large – a potential annoyance refracted through a lens of compassion and understanding, ultimately realised on a mighty pastoral canvas. It’s as good a signpost as any that this is music aimed at emphatically tugging the heartstrings as much as it is firing up the synapses.