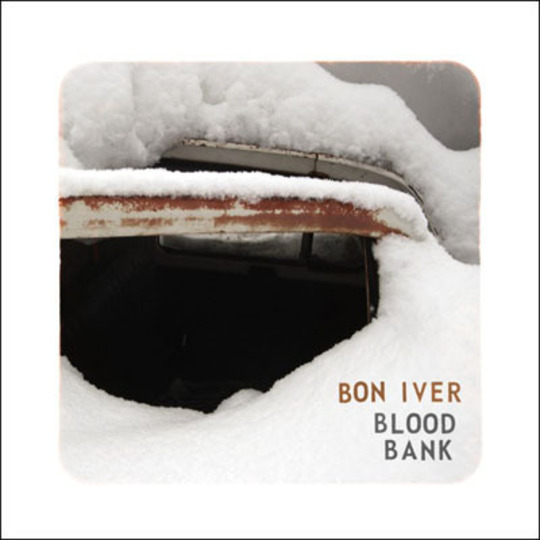 In a year of reclusive solo artists, it’s odd no-one chose to compare Bon Iver and Burial, seeing as how the similarities extend far beyond their media-profiles. Some while back, before his unmasking, the Artist Still Mostly Known as Burial described ‘Archangel’ as the realization, or vocalization, of the feminine part of his soul. It’s unclear how many distinct voices sing the sequential phrases "Holding you / Kissing you / Let it be alone" – whether it’s a single take, pitch-shifted in real-time (to locate the least artificial-sounding voice, on that last phrase), or several overdubbed; point is: the production enacts a search for that anima, and the process of its recovery or integration into the psyche of the song, or singer.

Listening to the ‘Blood Bank’ EP, it seems curiously apposite to think of Justin Vernon entering the same headspace as Burial by a different door, when he spent that now-fabled winter recording in a log-cabin; hey, even his riffs have a percussive, metallic clatter, reminiscent of dubstep rhythms (check ‘For Emma’ and ‘Flume’ especially). See, Justin’s Unconscious may not have let him recognize it – arriving at an unmistakably male falsetto, rather than any Prince-style sonic-travesty – but the whole album cried out to recreate a feminine voice, right there with him in that log cabin, to be breathing her in and out, instead of picturing her faintly in an increasingly distant past.

So. The Blood Bank EP is a fine appendix to the Bon Iver story, so far, and in its subdued elegance, the title track has all the emotional generosity of giving blood, tinged with the awareness of mortality. ‘Blood bank’ is another one of Vernon’s extended metaphors masquerading as a richly detailed anecdote that Cormac MacCarthy or Annie Proulx might have penned – a chance meeting only slightly out of the ordinary that has a hidden message about our consanguinity as lovers, or humans, or just organic matter. The lead track can only have been omitted because its guitar sound is a shade too contemporary. Had the album collected more & shorter songs, Vernon could easily have found space for edits of the more experimental offerings here – namely ‘Babys’, with its single-chord piano riff, and ‘Woods’, which uses Vocoder, albeit to sound like Judee Sill or Laurie Anderson – but both records need their integrity. Burial aside, there’s a fair comparison to be made with Antony’s Another World EP (review), as a similar disintegration of the elements of an artist’s sound that shows the sensitivity that goes into each drone or riff.

If you want to know what comes next, bear in mind: some of this was recorded across the winter of 2006–2007, and there's only one other player. If you haven’t seen Bon Iver live, check out the Daytrotter sessions, where a full band reconstructs ‘Flume’ and ‘Creature Fear’ with such inventiveness it’s like The Byrds turning mopey Dylan-songs into spangled beasts carrying you to the 5th Dimension. The latter song acquires an f/x-heavy rock ending, not far off Radiohead; meanwhile the backing vocals by an actual-real-live-female sound like redemption for the formerly solitary Vernon. ‘Flume’ collapses in a tangle of piano-strings halfway through, then picks itself up, like Talk Talk. Basically, you can glimpse the phantom of the timeless classic that Vernon might have recorded, under other circumstances, although this EP gives some clues, too.