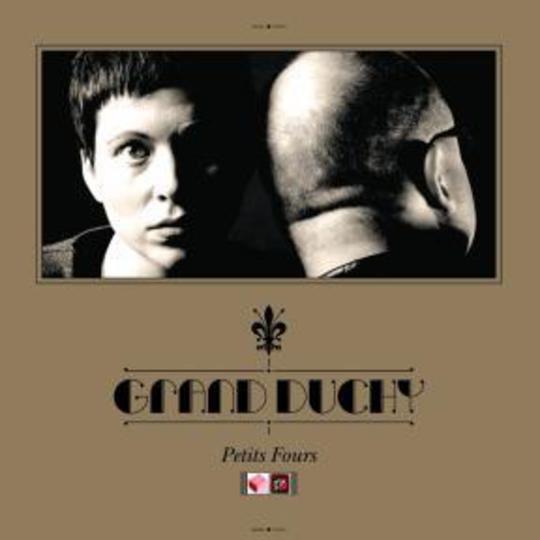 It would almost certainly be a waste of time and words to talk much about Frank Black/Black Francis as a prelude (for those who don't know, click here). We all know of the Pixies and countless solo albums since the Bostonian giants split up, then reformed, did a bit of touring and...well, you really should know the whole back story back to front by now. For his next trick (actually, David Lovering was the magician in Pixies, wasn't he?) Black teamed up with his wife, Violet Clark, went into a studio, had a few arguments, made songs and came out with these tracks which ended up as Grand Duchy's first LP, a refined piece of work known as Petits Fours.

In some ways, this is a bit of an 80s nostalgia trip, but not one which sounds faintly or even hugely ironic. Bearing comparison perhaps to Neon Neon's Stainless Style, the neat tweaks and tricks of Petits Fours lack any of the over-blown garishness that 80s retrospective music can tend to have. Instead, a firm foot is placed in both past and present. This is certainly not nostalgia for its own sake, and with some of the records Black has put out, who needs nostalgia anyway?

The centrepiece of each cut is either Black or Clark's vocal melodies (and sometimes both). Your ears are only peppered with synthesised sounds, with the occasional Deal-esque driving bass. Black is chalk and Clark is cheese, with Clark's velvety vocals a perfect foil for Black's bark, which is, of course, accompanied by his other trademark – the raging guitar wall of squall. 'Black Suit' - arguably the album's opus- showcases the inherent manic-depressive quality which remains in Black's voice as the howls of "everything that's blue is turning grey/boy looks good in a black suit/think that he looks divine" behind fuzzed-up sporadic guitar-thwacks.

At this stage in Black's career, it is hard to be surprised by his offerings, but it's Clark's participation which perhaps even outshines her spouse's. There's just something about Clark which you don't get with Black, and this album certainly would not have been as captivating a listen without her vocal participation. Bold as it may be to state, at times it feels like it might have been a more captivating listen if she took up sole vocal duties... although this notion is almost shattered by 'Ermesinde', as Clark's voice is wrecked by an autotune vocoder effect – perhaps the only real low point of the album, and thankfully it lasts for just 20 seconds.

Amongst the nine tracks are some of Black's best work but although the album's ambience shifts - from the darkness in 'Black Suit' and 'Long Song' to the whimsy in 'Volcano!' ("Hey muscle bear, I love your hair/ that 70s 'stache, used up the cash") and the breezy 'Break The Angels' – the consistency does not. It says it all that, in some ways, it's a little upsetting that there are only nine tracks. Though Black's career post-Pixies has been patchy, this is an undoubted return to form.