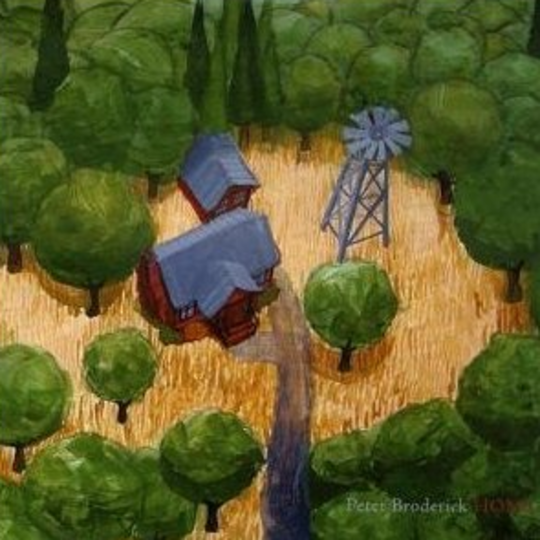 Impossibly young and blessed with a clear, wondrous talent that has seen him contribute his wares to the likes of M. Ward and Zooey Deschanel’s She & Him project and, most notably, the tinkling, swooning orchestral pop of Danish outfit Efterklang (who invited him to join their touring band), Peter Broderick – barely into his 20s, proficient at a number of instruments and of a yearning, graceful disposition – released his debut album proper earlier this year. Given some of the plaudits it’s received elsewhere, DiS thought an evaluation (better late than never) was something it really ought to get ‘round to doing.

So here we are. What should be pointed out immediately regards Home is how lovingly, immaculately crafted the record is. I’m talking all-inclusive here: check out the adorable cover art – a literal interpretation of the album title – and more so, the layered, gradually swelling compositions that comprise its musical contents. Having seen the Oregon-dweller perform the album in a live setting, the elements that intertwine and form his songs’ backbone are easier to comprehend, as he calmly and adeptly layers and multi-tracks his voice, violin, piano and classical guitar to superlative ends. These tunes are in no hurry to get where they’re going, as they know exactly where they’re headed – and as nonsensical a notion that might seem, it’s one that honestly makes sense given a little time spent in the company of Peter Broderick’s output, recorded or otherwise.

Importantly though, the idea that a well-crafted work is inherently one of worth should be laid to rest, as Home is far from perfect. It’s hugely impressive, certainly – and occasionally hits the emotional g-spot dead centre – but it’s inarguably flawed, also.

Thematically basing itself around the idea of a search for a ‘home’, the tone throughout is mournful; pacing resolutely, unapologetically sedate. Moments of tender beauty are present (the spectral, multi-tracked vocals that set its stall on ‘Games’; the coalescing vocal, banjo and strings on which ‘Sickness, Bury’ makes its presence keenly felt) – but through his unwillingness to shift gear from a grandiose first, Broderick risks losing his listener to a gentle (inviting, even) whirlpool of soporific undulations. A case in point is the twinkling, initially captivating ‘And It’s Alright’, which opens upon gently plucked arpeggios and the romantic suggestion: “Seven shooting stars and one night / The water and sand in our eyesight”. Percussion soon joins the fold, and this graceful number begins to unravel around the repeated incantation of its central lyric. It’s pretty (really pretty), but it could easily move somewhere else; head in a different direction – with greater (more memorable) reward.

In contrast to this, ‘Below It’ is a highlight, and the only point at which this album really sounds urgent, as such – striving towards what feels like a spontaneity of sorts come its closing push of ghostly vocals, as they mingle and dance atop a bed of skeletal acoustic guitar. It’s quietly breathtaking, one of the moments where the record truly takes flight; Broderick’s talent harnessed and driven towards ends unforgettable and immediately impressive.

In its enveloping melancholy it perhaps limits its appeal, and it’s certainly not the work of genius some may have you believe. Which isn’t to say the subtlety and elegance ubiquitous on the record isn’t appreciated – this is a work oft-enchanting and tenderly relayed: the sound of a first hand both confident and considered, whetting the appetite for more from this young American with a stately flourish.