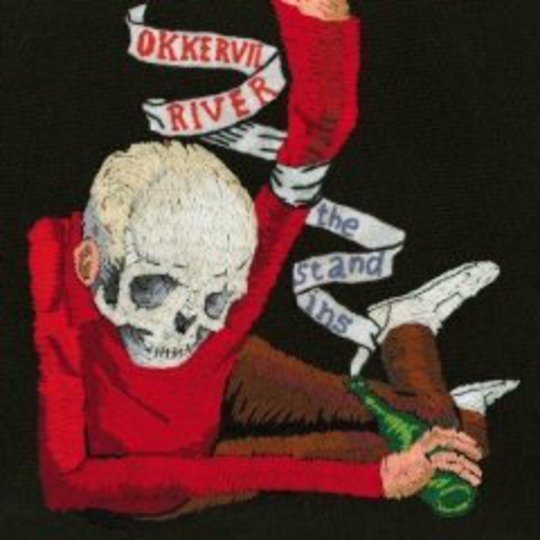 Finally seeing release on these shores a month after our US brethren received it, The Stand Ins is intended a companion piece – a sequel, if you will – to last year’s glorious The Stage Names, one immediately striking difference between the pair lying in the very style they open. Atypical of the earlier album it may be, ‘Our Life is Not a Movie or Maybe’ made its entrance like a coiled spring; muted guitar and intermittent splashes of drums unfurling on a bed of tension, even Will Sheff’s vocal straining to stay in key. A dazzling entrée indeed, but how Austin’s Okkervil River set themselves up here is rather different. Better? …Perhaps. Brilliant? Certainly.

For while The Stand Ins begins with a soft, aurally inviting whir and Tim Burton-esque push of strings (the first in a trio of interludes that permeate the record), it really gets going with ‘Lost Coastlines’, an infectious, melodic romp as loose and freewheeling as ‘Our Life…’ was taut.

It’s rousing stuff – escalating layers of instrumentation bolstering a simple central melody and Motown bassline, that sense – of having lost direction, of surrendering yourself to the ebb and flow of life, wherever it may lead – exemplified in both its lyrics and lyric-less closing third. A duet with departing member Jonathan Meiburg (now focusing all his time on Shearwater), it exudes poise and confidence, the implication its dual protagonists lend furthering its weighty gravitas.

Worth getting out of the way early: this album isn’t the next Black Sheep Boy. This should be obvious, really – given both its relationship with the immediately preceding (both records are culled from the same sessions, the same themes and characters are visited; even the artwork joins up), and Sheff’s on-record desire not to repeat the trick the band played so masterfully on said album. Where that set literally bled emotion; painful and occasionally brutal in its honesty, what this pair achieve – in their exploration of fame and corruption (held together by means of a playful fictitious intertextuality) – is inevitably a lighter proposition on the whole.

On that note, it’s telling that of all the songs recorded in the initial sessions, ‘Love to a Monster’ (available in demo form on the Australia-released Tour EP Overboard and Down) failed to make the cut on either release. Excruciatingly, astonishingly bitter (though wrapped around the breeziest of melodies), it cynically deconstructs the aftermath of a failed relationship from the perspective of its spurned half, and in this respect has far more in common with the brazen outpourings of Black Sheep Boy and earlier material from the band.

Thankfully, however, what we’re left with is a group of innumerable strengths, not least the ability to wrap lyrical vignettes and remarkable detail around delightful progressions and instrumental flourishes they’re seemingly capable of knocking off as afterthoughts (see for example the exquisite, mandolin-led 25 seconds concluding the otherwise abrasive ‘Pop Lie’, or bells and chimes reinforcing the wry pathos of yuletide-set ‘Calling and Not Calling My Ex’).

Yet as with The Stage Names, the ire so forcefully harnessed in their earlier incarnations hasn't entirely deserted them here – more that it attracts different targets:

“You got taste / Yeah, you’ve got taste / What a waste that that’s all that you have” – ‘Singer Songwriter’

In the above, Sheff spits out a disparaging attack on self-importance and a willingness to assimilate a readily accepted, ‘correct’ high culture of sorts. It’s not too far a stretch to suggest the victim of his wrath is the same “liar who lied in his pop song” in ‘Pop Lie’ – perhaps the ‘John’ who appeared on The Stage Names – who Sheff addresses directly in the barbed double entendres of ‘On Tour With Zykos’.

Though not as uniformly strong as its sister album (‘Blue Tulip’ notably a mite too sedate to really engage like it should), the beauty and world-weary charm Okkervil River hold in abundance emanates from The Stand Ins’ finer moments. Scott Brackett’s trumpet delights on any of its commendably restrained appearances, particularly in the warm, soulful buzz of ‘Starry Stairs’, or when perceptibly adding to the numerous hooks’ allure on ‘…Zykos’. It also makes its presence keenly felt on the album’s finale and crowning achievement, ‘Bruce Wayne Campbell Interviewed on the Roof of the Chelsea Hotel, 1979’. Here more than ever, Sheff’s lyrics – though marked by pessimism and mundanity (“the crawling way real people sometimes are”) – burn bright with intelligence and lucid evocation, detailing the ghosts of lived-in hotel rooms, lonely street corners and ceaseless longing, before the arrival of a “morning star ship” throws proceedings into orbit. Married, as they are, to dappled skins, picked banjos and a suitably ascendant musical backdrop, the effect is magical; better, even, than the appropriation of American standard ‘Sloop John B’ that triumphantly saw The Stage Names out – a solid-gold, shimmering album-closer, fading gracefully via the same haunting strings on which it began.

Of course, by this point the record’s been available on import for a month and potentially much longer through not-entirely-legal-means. What this means is that – on top of a consensus of sorts already being reached on it – you, yourself may have your mind made up too. Whether these words are likely to change, influence or impact upon all that is open to debate, but sure as hell that’s what they aim to. While it may not be the best thing they’ve ever done (or even will do), The Stand Ins is assured, ambitious and occasionally transcendent in its appeal – a worthy expansion of its forerunner and standalone joy in itself.