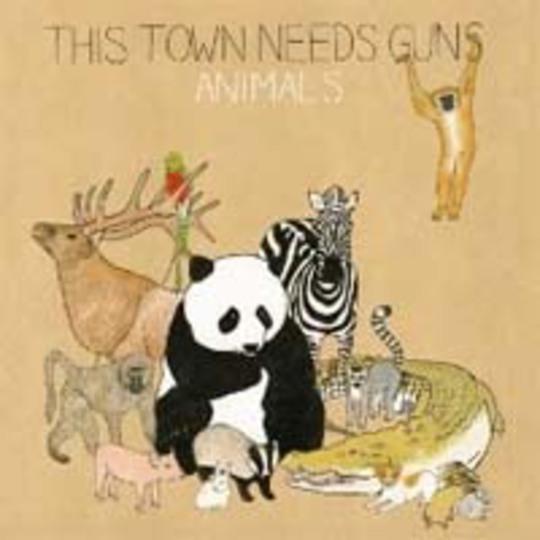 Following last year's well received split with Cats And Cats And Cats, Oxford math-rock combo This Town Needs Guns deliver their debut album as a conceptual piece; each track named after a different species of mammal. There's no denying that this band displays a high level of mastery of their instruments throughout Animals. Guitarist Tim Collis' cascades of chiming notes are the defining feature of the record, as he leads the rhythm section through a labyrinth of time changes.

But it's their devotion to musicianship that constantly threatens to sink this particular ark and its hapless, furry occupants. It can't be easy to confine this amount of technicality within traditional song structures, and This Town Need Guns are only occasionally successful; Chris Collis' jazz-influenced drum virtuosity has the tendency to distract attention from, rather than add to, the overall melee, whilst one can feel only pity for singer Stuart Smith, who is left with the unenviable task of fitting his vocal parts to the overwhelming deluge of notes. He puts in a valiant effort, but his likeable, understated voice is largely overwhelmed by his bandmates' incessant noodling.

Where some restraint is shown, as on the relatively staid 'Lemur' and soporific closer 'Zebra', sparks of brilliance are evident. Instrumental 'Elk' is also a welcome refrain from the surrounding bustle, with a pleasantly stripped back trumpet-and-guitar discourse. Overall, then, Animals marks out a cerebral band with a lot of ideas up its sleeve and even if they haven't quite found a way to effectively tie them all together, their potential for grander statements is clear to see.