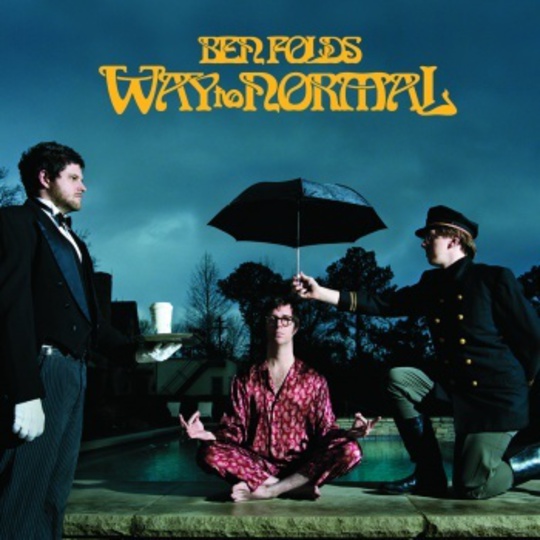 There's a long history of writers revealing a little more about their lives than they should. Now more than ever, we're all at it: blogs, Facebook, confessional memoir, songs. But people's personal revelations still have the capacity to shock. Those who prefer privacy would sooner dash themselves on the rocks than unleash the truth about their travails to a bunch of strangers. If, for instance, a certain writer disclosed in an album review that their main memory of Ben Folds' last release, Supersunnyspeedgraphic, was listening to it to get over the fact that the only girl they'd ever really loved had dumped them, that would be pretty dumb, wouldn't it? If they proffered evidence gleaned from iTunes which confirms that they'd listened to the song 'Bruised' fifty seven times since having their stuff thrown up the stairs (it was a basement flat), that would be a fairly embarrassing confession to front up, yes? Yes, you really would have to be an idiot to submit words like that. Or perhaps these days you wouldn't. You see, we're all becoming more open. And Folds, more than anyone, has a history of crossing the line. He can put the listener into confessional mode because he himself is so candid. It's like some sort of group therapy session - one whose core membership apparently consists mainly of men who read Nick Hornby books.

On Way To Normal, his third solo studio release, Folds takes his 15 year mission - to document romantic catastrophy - to a whole new level. 'You Don't Know Me' is, for instance, almost callous in its bald assertion that most couples are anything but open with each other and 'Cologne' is an incredibly tender song about the final, frantic stage of accepting that a relationship is over. If this is all sounds a bit twee, well - it isn't entirely. Granted, the ire of the more cynical DiS board poster might be raised to fist-smashing-against-keyboard levels - if not by some of the soppier numbers on this record then perhaps in the first instance by the overtly sentimental tone of this review (cue: get slagging). But let me offer a defence. The reason Folds can get away with it is that, for much of the time, the emotional core of his songs come liberally coated with humour. Laughing at the pathos of failure is a de facto reflection of the way the male mind copes with trauma (eg: see above). Folds taps into the psyche of men, and there is perhaps no better current songwriter who can give voice to this curious contradiction between openly laughing and secretly crawling under the duvet - a contradiction that lies at the heart of what it means to be a man who's got 99 problems - with a girl being the main one.

It's for this reason that Folds gets compared so much with the likes of Elton John, from whose sad-but-funny piano-pop lineage he is so obviously descended. So, where you have the holy trinity of 1) genuine emotional depth, 2) wry humour, and 3) perfect jumpy pop on Way To Normal; then you get classic songs. The three best album tracks share these three characteristics: 'Bitch Went Nuts', 'Brainwascht', and 'Effington', following each other in a beguiling emotional ebb and flow which reminds you just why Folds can be so enchanting.

The man's a veritable dynamo of subversiveness too. He recorded fake versions of half the tracks here and made the spoof lyrics sound deliberately cloying in a dig at the haters who knock him for his emotional candour. Though, in a twist, these fake songs aren't actually that bad (- and there are allegedly plans to release them separately|). At the age of 42, to see Folds still capable of making mischief and writing songs of such distinction is pleasing. You'd think he'd have traded in "making good music" for "Marmite on toast + slippers" years ago, but the title of his latest album speaks like a clarion about his ongoing project to tell all about the ups and downs of love.

The Way To Normal he speaks of is essentially the struggle to grow up and settle down. The revelation - explored beautifully in 'Effington' - is that attaining a "normal" life (woman, house, cat) doesn't mean you're going to keep it for ever. This is, after all, a man who is now onto his fourth wife... How his exes feel about him cataloguing his myriad turbulent relationships is a moot point. It is of course the writer who gets the privilege of documenting history - which means it's the writer who opens himself up to the flak, but also the writer who can describe things the way he sees them. But one suspects that Folds' former wives club might quibble with certain things he's said.

Way To Normal is not, by any means, a perfect record. But no Ben Folds album is. You need to skip through the songs which are too jazzy, too American, too preppy. In this case, that means ditching 'Dr Yang', 'The Frown Song' and 'Errant Dog', which reek like the bins on a Sunday evening. But when you come to a mesmerising stompalong song like 'Brainwascht', you forgive him and wonder why more people haven't given Folds a chance to wheedle his way into their heart.

Some people think true truths and real feelings should stay locked in the box. Certainly, the English revile American candour at some level. But if there's one person who can be forgiven for getting drunk and letting it all spill out, then Folds is one of them. And Way To Normal is closer to the heart-stopping intensity of his previous solo outings - Songs For Silverman and Rockin' The Suburbs - then we ever dared expect. It would be fitting if Folds never found his way to normal; if this littlest hobo continued to produce his peculiarly open, often majestic and occasionally transcendental brand of potent piano pop - songs which give a particular personal take on the universal truths about lost love we can all relate to. Folds proves that, sometimes, the gamble you take on saying too much can pay off.