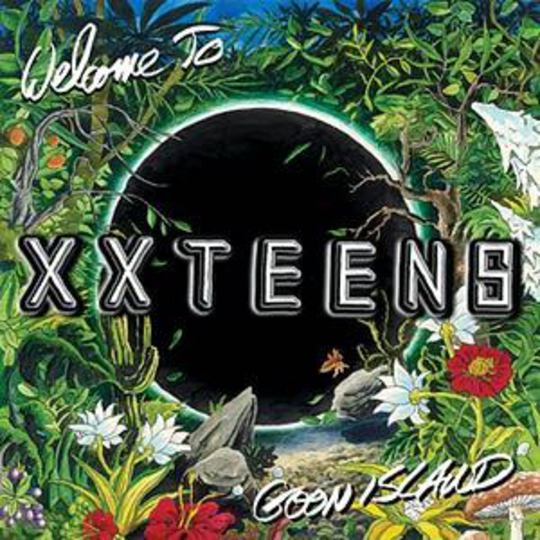 Things start promisingly enough on Welcome to Goon Island, but there is a confusing sense that we’ve heard all this before. Sprightly rhythms kick off opener ‘The Way We Were’, but once the central riff is introduced the potential for fun dissipates. Too much nothing, too much that sort of fits… let’s go with it; not enough time spent on making the musical corners as sharp and interesting as they could be. And that’s how much of XX Teens**’ debut album trundles on.

The key criticism: there is just such a large debt to Mark E. Smith here that it’s difficult to find much merit in certain songs when they’re held up to the likes of ‘How I Wrote Elastic Man’. The swaggering spoken-word vocals will no doubt be the main focus for such comparison, but the milieu that creates when mingled with the fuzzy basslines and thinner-than-hairs guitars makes for a more consummate kind of sonic borrowing. Similarly, previous single ‘Darlin’’ is, no doubt, supposed to make us go “killer horns!” but these are horns too simplistic and just plain uninspired to prompt such dudely responses – over and again, XX Teens prove that their sphere of influences is terribly small.

Thankfully there are pockets of invention, and one step into the epic by the title of ‘Sun Comes Up’ calls to mind a raft of interesting predecessors – Pulp, Ikara Colt, Television. The vocals are committed – at other times they seem a touch too lazy – and there’s a real verve, intensity and buoyancy to the tribe-aping rhythms. The final track ‘For Brian Haw’, as well, contains power enough; shame its makers had to lop its end off and spoil the closer with a righteous political comment at its end. As noble as Brian Haw’s testimony is, it’s not terrifically engaging as an album’s last thought.

The whole record is distinct by its refusal to build on its obvious potential. While it’s by no means anything to get terrifically excited about, it is certainly not a disgrace. XX Teens are a band that needs to grind their instruments harder, and with more conviction. A time spent in solitary confinement somewhere before their next record would do them a hell of a lot of good, possibly allowing that most crucial of influences to make an appearance – the authors themselves. For now, Welcome To Goon Island marks the beginning stages of band’s slow melting into their own skin, albeit with a handful of misfires on the way.