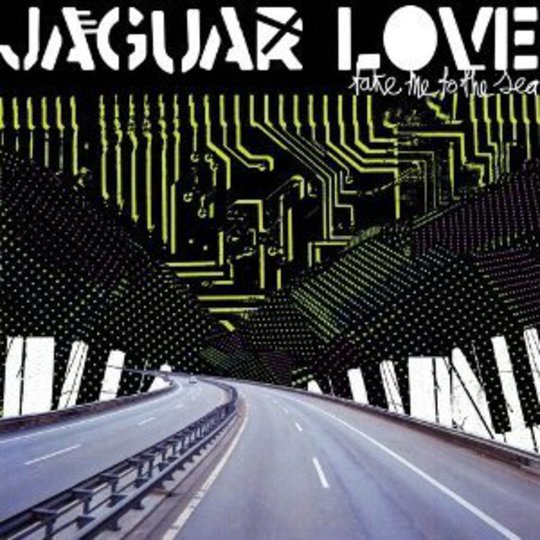 You have, in the context of a man in a fantastic band, to feel kind of sorry for Jaguar Love drummer J Clark. Without resorting to an unlikely statistical mission to confirm such speculation, we’d wager at least 83.8 per cent of interested listening parties are here because of one band. And it ain’t – ass kicking and loved as they were – Clark’s former pursuit, Pretty Girls Make Graves. Sorry.

You see Jaguar Love, for the criminally uninitiated, are the first fully out the traps in the post-Blood Brothers landscape, after the screaming Seattle art-core cult legends said sayonara last year. Specifically, they are the baby of their addictively girl-larynxed vocalist Johnny Whitney and string-rippingly awesome guitar demi-genius Cody Votolato (plus, lest we forget, the aforementioned Clark). While The Blood Brothers’ two-headed hydra railed and screamed scabbed murder at a curious universe they had created, filled as it was with day-glo imagery, fleshless skeletons, lightning, and elliptical avian references, Jaguar Love instead immerse themselves in said alternate existence. This is, as close as matters, Whitney’s world, skin-stripping shrieks over Votolato’s bastardised punk-rockisms married to excited pop and (relatively) melodic tendencies.

Whitney is back on the birds and bones references immediately on pouting opener ‘Highways Of Gold’, even if that proves something of a false dawn. The basic rule of thumb throughout this, their debut album, is the more ridiculous and throwaway the random match wordplay, the greater the tune within. So ‘Jaguar Pirates’ harmonises and pillages with all the deranged enthusiasm of a house party gone badly wrong; ‘Vagabond Ballroom’ is better still, yelling syntax with crazed verve as the words “Sixteen floors / 7,000 rooms” become a subliminal code. The fact that the latter is largely nonsensical matters zero. Because when, three and a half minutes in, Clark’s hammering heralds a drop back into the headrush chorus, Jaguar Love sound so glorious, so connected, that Whitney could recite his family tree and it wouldn’t break the spell. Take Me To The Sea is also, at points, closer than we ever came to glimpsing inside any sort of reality from The Blood Brothers, weaving together tales of eviction and personal strife among wide-eyed hyper-reality like ‘Humans Evolve Into Skyscrapers’.

The sole nagging doubt – with beautiful bullets to the brain this instant, can Jaguar Love ever approach the almost unmatched longevity Whitney and Votolato’s former charges possess? – prove irrelevant, too. Because longing for The Blood Brothers (or even, of course, Pretty Girls Make Graves) is as futile as rating a current girlfriend against an ex: while both may have inspired your love, all that truly matters is the here and now. And Jaguar Love are very much of today. There is no turning back.