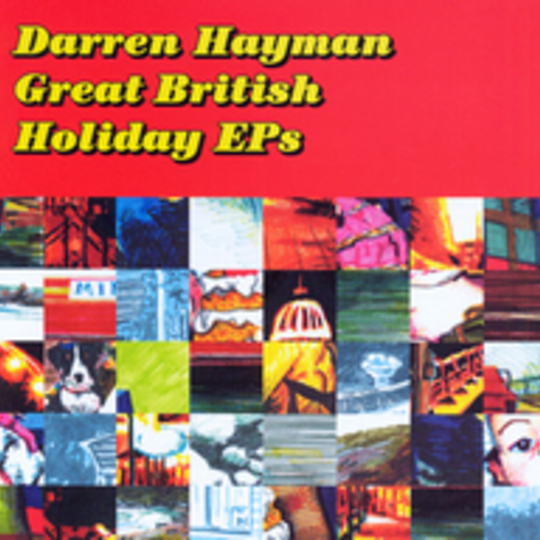 Darren Hayman is fast becoming as much of a great British institution as Queen Victoria, afternoon tea and single mums. It comes as no surprise then to find that between July 2005 and October 2006 he found himself writing about and subsequently recording several odes to British seaside holidays.

Recorded in various locations from Newbiggin By The Sea caravan park to the Seabeach House Hotel in Eastbourne, Great British Holiday EPs is an occasionally witty, sometimes poignant and often nostalgic look back at Hayman's childhood memories and first blooms of adolescence through the portal of a family holiday. Initially released as four separate EPs ('Caravan Songs', 'Ukulele Songs From The North Devon Coast', 'Eastbourne Lights' and 'Minehead'), every song on this collection seemingly holds a special place in its author's heart, whether it be the lo-fi noodlings of '8 Bit World', whereby Hayman celebrates his trusty Commodore 64 over newer technological computers, or the closing vignette '1976', where this time he finds himself travelling back in time looking for a stylophone, tank top and Twiggy - i.e. his most favoured recollections of the year in question.

For those fortunate enough to have purchased these (very) limited EPs in the first place, there's the added incentive to shell out your pennies on this collection by way of four previously unreleased songs. The first, an original composition entitled 'Victim Song', is an eerie part-spoken, ukulele-driven ballad that illustrates the finding of a young girl's body and the reaction of the wider community. The other three see Hayman perform his own unique versions of Connie Francis standard 'V.A.C.A.T.I.O.N.'_ and, perhaps more impressively, the jaunty 'Holiday Road', previously recorded by Fleetwood Mac's Lyndsey Buckingham but perhaps better known as the theme from National Lampoon's Vacation_ flick, along with Chas and Dave's 'Margate', which compares the run-down Kent resort to the Costa Brava and naturally beats it hands down.

Also enclosed as part of this package is a DVD featuring homemade videos to the four EPs’ lead tracks as well as a documentary-style ‘The Making Of…’ segment that takes in such delights as bingo, karaoke and tea and cake along the seafront. There's also a brief interview tagged on the end which, although not startlingly revealing, at least gives some idea as to the gentle, humorous persona of Hayman.

Some might say that Great British Holiday EPs is nothing more than a stop-gap towards the next Darren Hayman & The Secondary Modern record - or indeed whatever project the lo-fi indie scene's very own Mark Ronson decides to turn his hand to next - and in the grand scheme of things they'd probably be right. However, this is an essential collection for anyone either previously encapsulated by Hayman's more celebrated work with Hefner or just bedazzled by his recent spate of live performances.

He may well be the last of the charming eccentrics.