Take The Mid-Range And Boost It 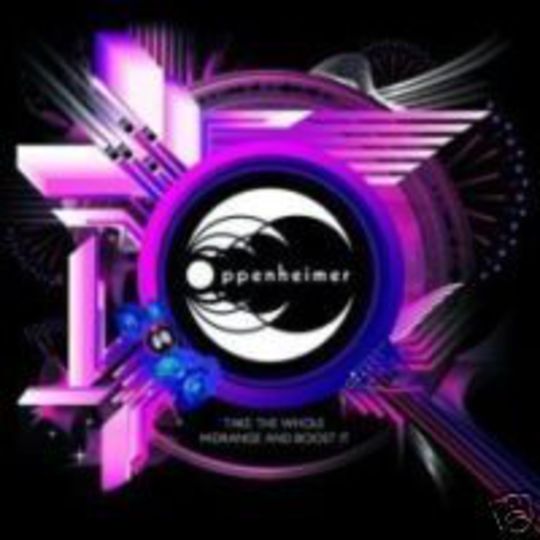 Still relatively unknown this side of the Irish Sea, Belfast duo Oppenheimer continue to pick up celebrity endorsements with every new note of space-age, techno-laced widescreen pop they produce. If the involvement of David Holmes and Tim Wheeler on 2006's self-released eponymous debut long-player wasn't enough, Snow Patrol's Gary Lightbody recently called the pair "the Irish Flaming Lips or Mates Of State - an incredible new band". One thing's for sure: Oppenheimer can't be ignored for much longer.

Take The Mid-Range And Boost It is a more ambitious affair than its predecessor, soaked in radio-friendly hooks and synths that sound like The Postal Service gone happy go lucky, or even I Was A Cub Scout's older, wiser brothers. With a penchant for recreating the works of Brian Eno in a 21st Century Technicolor Dreamcoat, not to mention an embracing all genres from shoegaze to metal and hip-hop (their version of NWA's 'Straight Outta Compton', available as a free download here, has to be heard to be believed), Oppenheimer redefine the word eclectic by their own unconventional standards.

Although each of the twelve songs here is eclipsed in a combination of electronica-instigated effects and saccharine-sweet harmonies, most barely stretch the three-minute mark; thus, Take The Mid-Range... is more of an exercise in experimental pop than your everyday avant-garde Eno enthusiasts. Shaun Robinson's vocals do attract immediate comparisons with those of Wayne Coyne, although the subject matter of most of the songs - homages to celebrated gay authors ('Stephen McCauley For President') and crazy sound engineers ('Fireworks Are Illegal In The State Of New Jersey') - as well as the layered soundscapes that encapsulate them bear an uncanny resemblance to M83's more upbeat moments.

Elsewhere, 'I Don't Care What Anyone Says About You, I Think You're Alright' puts the vocoder back in vogue after Cher desecrated its corpse a decade ago, while album standout 'The Never Never', featuring a cameo from The Bronx's Matt Caughtran, perfectly illustrates Oppenheimer's ability to switch from swooning pop to feedback-encrusted noise at the flick of a switch.

Admittedly there is always a danger that over-exposure to something so sweet may ruin an appetite for something more substantial further down the line, but for now Take The Mid-Range And Boost It is as near to twisted pop perfection as you'll find anywhere.