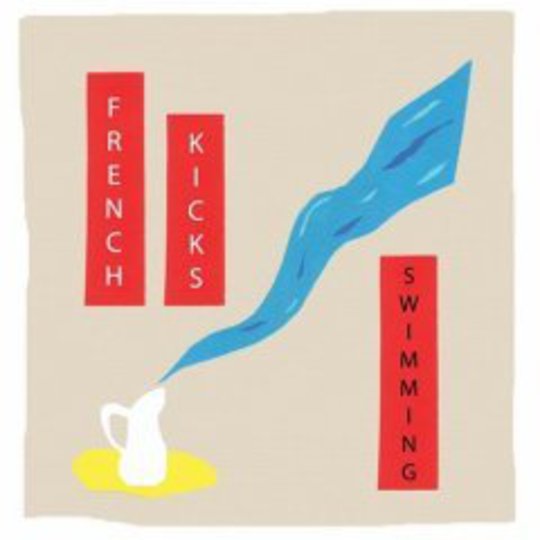 If there’s ever been a band you wanted to shake like an insane nanny with an unruly newborn it is French Kicks, and sadly their fourth full-length only serves to increase the frustration level.

The band rode in on the coattails of the Strokes / Walkmen / Interpol New York City post-punk revivalism of the new millennium with a couple of promising EPs and a spunky album in_ One Time Bells, and in the intervening six years altered their focus towards pop melodies and dreamy harmonies, stylistically eschewing much of what made them entertaining in the first place. The reason many critics continue to hold out hope is because they have all the elements of being a great band; nevertheless, Swimming _only perpetuates this feeling of not living up to their potential.

Swimming flows together a little too neatly, and as a consequence the production becomes more memorable than the actual songwriting. And that’s a shame because only a minor amount of tweaking could do wonders for this album. Vocalist Nick Stumpf sounds a little too pleased with himself on ‘Over The World’, yet it’s not impossible to believe this girl he’s pining for won’t truly wait for him. ‘New Man’ _effectively highlights Stumpf’s unhurried vocals and galloping drums which nicely compliment tremulous guitars. The problem arises from the fact this could pretty much describe all the songs on _Swimming. Without some form of punctuation the tracks meld into homogenous soft rock which fails to have lasting efficacy.

French Kicks cannot rightly be pegged as a one-trick pony but the formulaic organisation of this record emphasises lushness at the sacrifice of any surprises. Experimenting with instrumentation on_ ‘Carried Away’ is to be a step in the right direction, yet employed with such trepidation it’s difficult to get overly enthusiastic. _‘With The Fishs’ _is pleasant enough to be the backdrop for a tender moment on Grey’s Anatomy but nowhere to be found is the thirty second snippet of excitement which might attract an automobile advertising deal. Now, I have no problem with French Kicks’ attempt at making their music accessible to the masses, but dumbing-down their arrangements doesn’t do anybody any favours. _‘Love In The Ruins’ _floats by so innocuously it could be a mirage. The emotive vocal technique on _‘The Way You Arrive’ _has long since stretched beyond making an impact. It isn’t until the spaces between the keyboard riff on the next song, _‘All Our Weekends’, does the claustrophobia finally break. ‘Sex Tourists’ _has the same breezy infectious manner, but is held back by a vibrato guitar which doesn’t come across provocative enough to match the song’s intent. Things start to go right on ‘This Could Go Wrong’_, although by this time it’s too late to bump the forgettable nature of the preceding eleven tracks.

If not entirely impervious to constructive criticisms, the subjunctive shift from last year’s _Two Thousand _seems too small a concession. That the bulk of their original NYC brethren have also faltered to varying degrees can be little consolation as they have yet to deliver the one gem of an album from which they can hang their pedigree. _ Swimming _isn’t flat-out awful by any means, but it is particularly disappointing watching this band getting by with dog-paddling when we’ve seen glimpses of how good they are with freestyle.