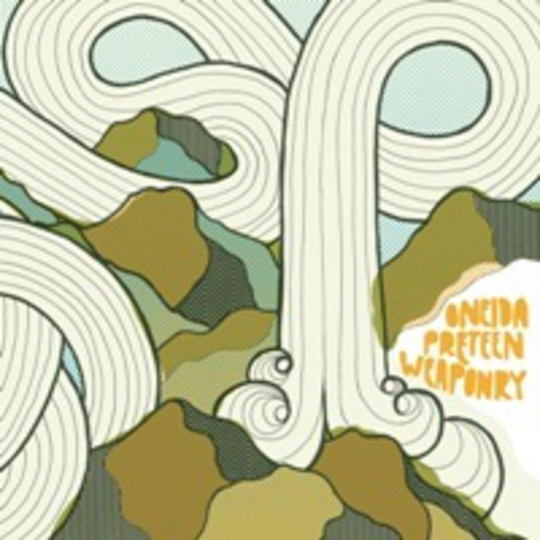 Everyone should have Oneida in their lives. Unpredictable, eternally shifting guises, the Brooklyn outfit have retained something of an erratic edge, whether it’s coming through clear on the methodical slog of Secret Wars or the mechanical bite of Anthem Of The Moon. So, where next for the prolific quartet after a reasonable break following the celebrated melodies of 2006’s New Year? A part-improvised concept record spanning three releases, that’s where.

The opening chapter in the triptych – falling under the umbrella of the Thank Your Parents series – Preteen Weaponry immediately lays down the sort of conceptual blueprint the act have always enjoyed focusing things round, often outside of office hours as side-projects, film scores and split EPs. One mammoth, largely instrumental track, drawn out and chopped into three separate works, all clocking in at over ten minutes apiece; a far from retiring return.

All but immediately familiar juggernaut basslines have sunk into the gut, as all turns uneasy with stray hooks finding a furrow. Oneida are no strangers to epic slogs with single tracks, racking up their fair share over the years, most notably with the pair of stomach churners that open Each One Teach One. But these mark less of a rockist approach than those previous moments of indulgence, instead ploughing head first into a psychedelic assault that sits carelessly between rotting stoner drudge and methodical kosmische climbs, with thick riffs mounting atop each other. Part of the art of all this though is the detail applied, swathed in delicate touches. You’d be hard pushed to find a better description than Jagjaguwar’s, hitting the nail on the head with the proclamation that anyone needing their reductivist tendencies satisfied can consider Oneida “the bastard offspring of a Can/Suicide marriage”.

Soon out of view, it’s a bit of a faceless beast. Yet, with the Gregorian chants, muscular minimal compositions and bludgeoning basslines that have long been part and parcel of the usual Oneida package, it seems familiar territory however trying. Each part eats away at another enough for the boundaries between tracks to blur, yet ‘Pt. II’, with its deadened bass lugging away and hollow harmonies appearing from the undergrowth, initially seems indebted to their previous collaborators Liars’ neo-tribal rout, or the primitive pursuits of Raccoo-oo-oon. But with a career harking back to 1997, it’s easy to forget this has long been their usual garb.

Still playing games in their pomp it’s a decent - if patience-sucking - return that feels as if it’s pre-empting something rather than standing out as a glorious spectacle. Out at the turn of next year, Rated O, the second release from the three-part odyssey, seems eagerly anticipated, perhaps in the hope of something a little more straight-laced. Seems everyone’s ignoring the fact that the release is a three-disc record. And it’s Oneida.

Preteen Weaponry’s psychedelic rout may be far from their finest hour, but it serves to remind all that these jesters should belong as part of the furniture.