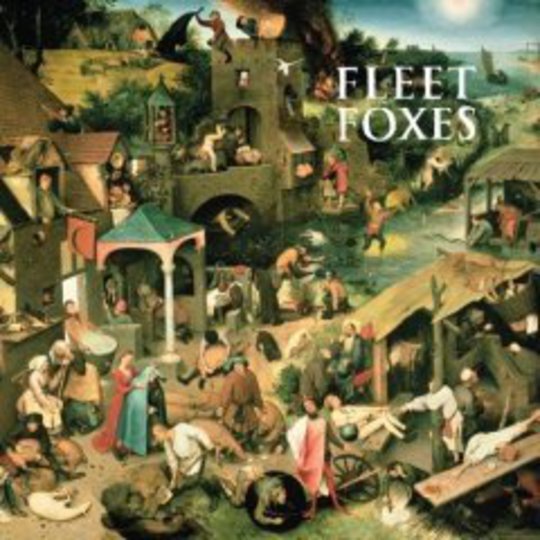 Fleet Foxes’ inevitable success has been well telegraphed. As critical adulation gradually transforms into commercial gains, a path is easy to map: Band Of Horses get missed by the press here first time around, and we all play catch-up with Cease To Begin; then, Bon Iver’s initial ripples rise to waves earlier this year, not unexpectedly so given the wondrous For Emma, Forever Ago LP. Now, this Seattle five-piece – pitched between the aforementioned pair, and part of the Sub Pop family stateside (as are Band Of Horses) – make good by building on the foundations laid by said predecessors. Fleet Foxes is a collection of understated Americana offerings, each punctuated by Robin Pecknold’s truly captivating voice. It’s a slight, sketchy album, songs skeletal but rich of emotion, each meandering to its own pace, a shuffle to a finish line.

So why the amazing reviews, the held-breath at shows, the reverence from all corners? After all, Fleet Foxes aren’t breaking boundaries, pushing envelopes, et cetera; they’ve merely concocted a well-realised album of twanged strings, gentle percussion and vocal harmonies to soundtrack your dreams. But… that’s the point, really. By not attempting to progress their chosen art, instead zooming in on what makes it so very appealing in the first place, Fleet Foxes have concentrated their craft and provided an album to aid the drifting to Nod, the passing of time slow and steady. Pecknold’s lyrics and his delivery of them become the focal point of the LP, his tales unravelling with barely a whisper of bombast to drown them out, bandmates on hand to flesh the bones, to colour up to the lines but never over them.

His voice often echo-drenched, Pecknold’s holding of the listener’s attention is quite something, a remarkable achievement given the downplayed tone of the instrumentation around him; on ‘Meadowlarks’ words give way to mere noises, hums and moans, and still the hairs won’t lie flat; ‘Tiger Mountain Peasant Song’ is man and instrument singular in unison, an acoustic tapped and strummed to perfection. These songs, there’s really very little to them; there’s really very little to write about them, critically. They’re not big nor clever, and as passionate as they are the delivery and pace remains one-dimensional throughout. Yet still Fleet Foxes doesn’t leave the stereo. Three, four, five times through – these songs resonate over and over until they stick for good. A sign of a great record: words fail but a feeling remains.

‘White Winter Hymnal’ – much-viewed on YouTube and listened to on MySpace – is a neat summary of what Fleet Foxes offer across this debut in just two and a half minutes: cheerful strum, enveloping harmonies, drumming that’s only just there, tapping away with a persistent thud in the background. Come its end only voices can be heard, everything about them turned down to a whisper. Analysis of its lyrics reveals death – “Michael you would fall, and turn the white snow as red as strawberries” – but the beauty of music like this is that you can read it as deeply as what suits. There’s no need to explore the caverns if the carvings on the entrance are what you’ve come for. Besides, Fleet Foxes is almost certain to receive repeat plays from those it finds a home with – indescribable perfectly though its ‘X’ factor is, nevertheless it keeps its audience on a tight leash.

The door may have been more than slightly ajar for Fleet Foxes prior to this release, courtesy of aforementioned peers having the decency to attract plaudits aplenty, but even if it were locked tight there’s enough magic within these eleven tracks to prise any bolts clean from the timber. On they stroll, through into the light of a thousand hand-claps and audiences always on the grow, always keeping up with only themselves. Seems to have worked well so far.