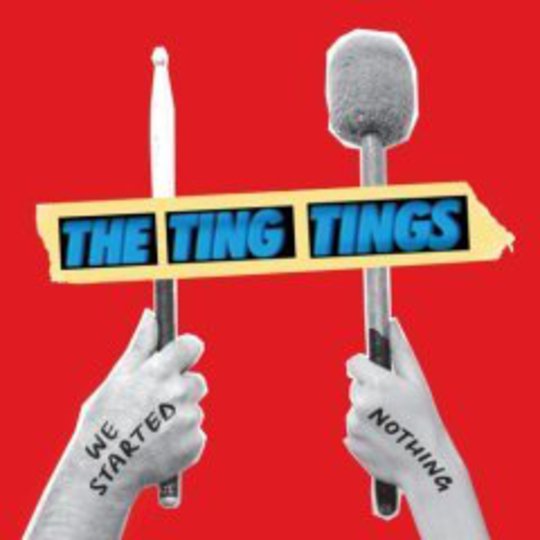 By not making their minds up as to what sort of a band they want to present themselves as, The Ting Tings come unstuck on their debut album by treading a middle ground between dizzying toxic pop and dirty, scratchy indie. We Started Nothing is a lot of gloss short of being a full-blown glitzy behemoth a la all those Timbaland- and Pharrell-collaborating divas, and too clean to mix it up with the likes of the similarly structured but infinitely sexier The Kills. It’s a flat-sounding exercise in maximising a limited palette of inspiration, fleshed-out in a way that finds its few highlights suffocated by banal repetition and amateurish compositional ability.

Its reception on a critical level can’t be aided by ‘That’s Not My Name’, an appalling pre-LP single in the context of what else is on offer here, essentially a five-minute intro to a much bigger song that never emerges. Better is the only other standalone to date, ‘Great DJ’, a sweet and sour stroll through the mundane weekend excesses of regional revellers a not-so-super club short of ever having a night of their lives, which begins these ten tracks. When vocalist Katie White keeps her lyrics playfully nonsensical there’s a definite charm to her – the album’s opener is a neat enough example of this, nagging “ah-ah-ah”s burrowing the song into the listener’s skull. Less brilliant is when she’s getting bitchy: “Shut Up And Let Me Go” (as heard on ads for iPods), among this record’s better-arranged pieces as it presents a funk-infused guitar line or two to the fore, suffers from White’s unconvincing tough-gal attitude.

Unlike the relationship between Crystal Castles’ Alice Glass and Ethan Kath, where the female singer plays only a supporting role on the band’s similarly-hyped debut record, White and comparable ‘guy at the back’ Jules De Martino share a relatively equal billing here, and both showcase strengths. De Martino handles production duties decently, and although the final mix has been tidied by stateside hired hand Dave Sardy you’ve got to show the backroom half of The Ting Tings some respect for guiding this project through ‘til (near enough) completion himself; clearly it’s something he very much believes in. White’s an ever present across the ten songs, and while her contributions vary in terms of effectiveness her appearances lend We Started Nothing necessary cohesion. Her most-striking shrieks irk, but when she softens her sometimes shrill tones down somewhat you get the impression there’s a pop princess inside her super-trendy exterior desperate to be heard.

The pair come together vocally a handful of times on We Started Nothing, ‘Be The One’ an endearingly simplistic indie-pop head-nodder in the vein of early-era Cardigans; elsewhere, ‘We Walk’ is a lush ballad in hiding that’s too scared to show its true spots for fear it’ll be laughed out of town by cool-as indie types, its incessant cowbell effects eventually tiring the attention despite the album’s most heartfelt vocal from White. ‘Traffic Light’ is almost jazzy of structure, and makes for an enjoyable diversion from the hammered-home percussion evident on the majority of these songs.

But these glimpses of something unexpected are few and far between, much of We Started Nothing tonally muddled into a weird new form of MOR: cool for five minutes amongst the fashionable crowd but unlikely to reach audiences beyond those fascinated with the hot and happening. There’s not enough meat to these bones to tempt fans of the biggest female pop stars around, and by seemingly resisting the call to add a little excess to proceedings The Ting Tings have accidentally constructed their own glass ceiling. How high is it, exactly? I don’t know, but they’re likely to strike it soon unless they raise their game on a swift-turnaround second LP.