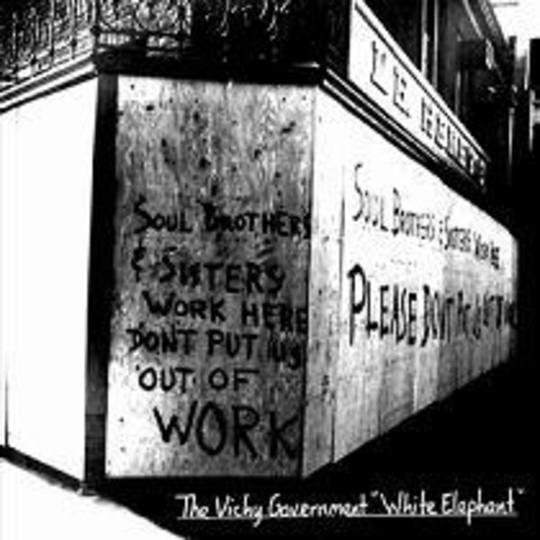 White Elephant: a valuable but useless thing which costs more to keep than it earns you in status. Or: a junk sale after which keeping the unsold leftovers in storage costs you more than you earned in the first place.

Or the third Vichy Government album: a constitution-battering 60 minutes and 18 tracks of pop misanthropy; their best effort yet and a perfectly realised piece of work. The format is as one expects from The Vichy Government: bitterly intelligent and often searingly funny spoken-word lyrics dredging subject matter from the less-savoury depths of human experience and presenting the results in the style of a deadpan devil's advocate. Beneath this, sneeringly minimal keyboards and drum machine are wrapped round some fantastic pop tunes and some rather less-hummable disorienting atmospherics, an uncompromising musical format which sets the dark and flippant vocals off to perfection, matching the twisted subject matter with a stark and stripped-down setting.

This may all sound rather amusical, but... Well, for a start, a great tune is still a great tune no matter how disorienting the medium it's packaged in. White Elephant_ is crammed with melodies which get very thoroughly stuck in one's head, including many of the tracks which really do sound far too wrong to be compatible with catchiness - and yet they manage it. Which is quite an achievement, really.

Having reached the end of the album and finished reeling from the glaring oddity of the whole thing, the sensation starts to creep in that, by pushing its deconstructed take on pop music through some sort of normality boundary and out the other side, White Elephant is playing a fundamental role: a kind of irrational number which mayn't be pop music as it's usually perceived, or indeed as it'd wish to be presented, but is nonetheless necessary to the integrity of the whole.

White Elephant would, by dint of having such great tunes and containing such beautifully barbed vocal gems, be ace no matter what - that it presents these factors in such a definitively warped and counter-intuitive way makes it quite simply an essential record of its ilk.