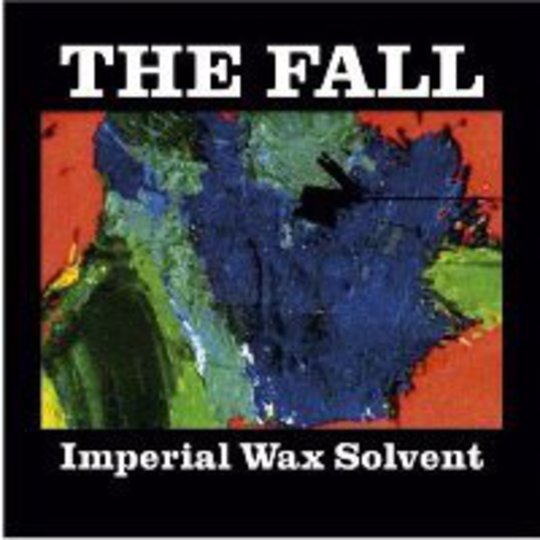 He’s there again. Propped in the corner. Back stooped. Ale-soaked tongue hanging out his haggard gob, slaying gentle folk ordering their mid-afternoon spritzers and snacks with monosyllabic jabs. Fuck. He’s caught your eye, called you over. Speed-addled gums sucking away to keep from the indignity of having dentures drop out, readying conversation. Leaning a wiry limb round your neck in a grasp indecisive, between throttle and affectionate clinch. It’s the same story you’ve heard that awful cunt tell 26 times before, through three decades, in differing states of intoxication. Today, though, there’s a contented gurn plastered across his face. He’ll be back to his bitter bastard self tomorrow; lap it up. “I’m a 50-year-old man” he starts. “And I like it”.

And so, Imperial Wax Solvent, outing #27 for The Fall, opens with the kinked jazz of ‘Alton Towers’, a weather-beaten reincarnation of Edvard Grieg’s ‘In The Hall Of The Mountain King’ with Mark E. Smith’s whispered drawl about as sexy as it’s ever been, reduced to a haunting husk. For a fellow that harbours such an utter contempt for the world of gash-flashing celebrity culture Smith sure dedicates a fair share of attention to its smug faces, sniping at “the spawn of J _Loaded Brown”_ and “L. Laverne” within the opening minute of it all, later turning his tongue to Jeffrey Archer and Jeremy Kyle. But this skulking introduction is one of the few moments on IWS that could truly be identified as delving into unfamiliar waters. Instead it’s those perennial rugged Fall basslines of old that hug the limelight.

Ever toying with techno throughout the ‘90s (to particular effect on The Unutterable in 2000), Smith’s recent escapades with Mouse On Mars as Von Südenfed provide a sore-gummed influence, with the scattered acid-house remnants of Tromatic Reflexxions rearing up most unmistakably in the industrial hip-swivelling instrumental grind of ‘Taurig’. MOM lynchpin Andi Toma contributes to the production, alongside heyday mainstay Grant Showbiz, whose contribution was sorely missed on last year’s empty-lunged exhalation Reformation Post TLC, with its turgid production drawing the eye away from its occasional delights. Again, rather than blanket-wrapped by his backing band, Smith’s worn bingo call vocal - less bafflingly prophetical from the man whom “used to be psychic, but I drank my way out of it” - sits high in the mix over his makeshift roster’s brutal brouhaha, his maddened riddles the centre of attention, particularly when _‘Fifty Year Old Man’ – clocking in at over eleven minutes – rears up with Smith beating his breast, proud of this middle-aged mayhem he’s stoked up.

Whether trademark terrace chants, Elena Poulou’s usual sickly sweet Europop delivery on ‘I’ve Been Duped’ (not far removed from Billy Childish’s pairing up with beau Nurse Julie) or Smith’s usual nanny state baiting on ‘Latch Key Kid’ (it’s difficult to not to imagine ‘Japanese prison camp’) the record is typified by resounding optimism, even with the gun-toting ‘Is This New’’s band-savaging or the psychotic psychedelic closer ‘Exploding Chimney’ laying on debonair putdowns, with Smith mentioning rat poison as if he’s vermin you can’t kill off. There’s even enough time for the Iggy-adulating Prestwich priest, as with ‘Elves’ way back in 1984 and a hundred times in between, to find another excuse to regurgitate ‘Wanna Be My Dog’ with a ramshackle cover of Brit blues cohort the Groundhogs’ ‘Strange Town’. All good fun y’see.

So sit in that corner and soak it up, Smith spitting those same nonsensical stories you’ve had jabbered away to you so many times before, because, frankly, after a few duds peppered over the past few years’ releases, Imperial Wax Solvent is another remarkable batch of brilliantly deranged tales no whiskey-breathed war veteran across the bar could trump.